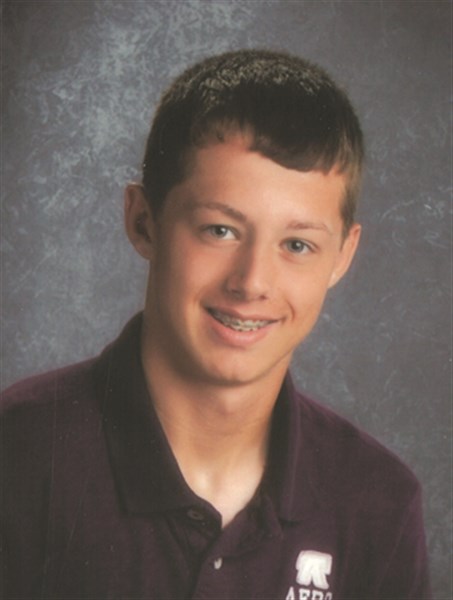 Triston Wayne Ackley, 16 years old, of Tingley Iowa, was born on August 30, 1998 in Maryville, Missouri and passed away on January 24, 2015.
Triston spent the first 5 years growing up in Grant City, Missouri. In September 2003, Jason and Julie combined their families and made their home in Tingley, Iowa.
Triston was a sophomore at Mount Ayr Community School. He was active in football, baseball and track.
Some of Triston’s hobbies include running, hunting, fishing and being outdoors. Triston always had a smile, he never knew a stranger and was eager to visit with anyone.
Triston was a very driven person. He set high goals for himself in every aspect of his life. He always found a way to meet and exceed those expectations. Triston was a very independent person and very true to himself and his beliefs. He treated everyone with the same attention and respect. Triston had a big heart and was always quick to lend a helping hand to anyone. Triston had a great sense of humor. He had a knack for quoting lines from his favorite movies. Triston is a special young man that will never be forgotten.
Triston is survived by his parents, Jason and Julie Ackley of Tingley; his sister Hanna of the home; grandparents Ed and Cindy Ackley of Grant City, MO, Carl and Elaine Owens of Grant City, MO and Jerry and Judy Cooper of Tingley, IA; and great grandfather Joe Lindsey of Red Oak, Iowa. Triston is also survived by a host of aunts, uncles, cousins and friends. Visitation was held at Watson-Armstrong Funeral Home in Mount Ayr on Wednesday, January 28 from 4-8 pm. Watson-Armstrong Funeral Home is in charge of the arrangements.
Services are in the Mount Ayr High School gymnasium 2 p.m. Thursday, January 29 with Rev. Bruce Giese officiating.
Pallbearers are Doug Campbell, Chad Holmes, Bruce Quick, Brad Elliott, Larry Jarred and Carl Staton.
Burial will be in the Tingley Cememtery in Tingley, Iowa.
Memorial Fund to be split between Mount Ayr High School football, track and baseball programs.