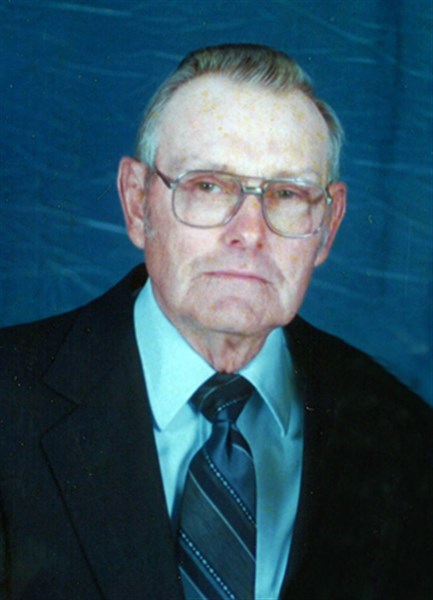 Harold Rawleigh Brown, son of Ellree and Mary (Greenland) Brown, was born May 5, 1926 at Grand River, Iowa. Harold graduated from Grand River High School in 1943.
Harold was united in marriage to Eloise Walters on October 7, 1950 at the Little Brown Church in Nashua, Iowa. Harold was a lifelong farmer and lived around Tingley all of his adult life.
Harold was a man of many interests and loves. He was an active member of the Tingley Christian Church. Over the years, he enjoyed woodworking and photography. He captured many outdoor moments with his camera. He was an avid reader and would read several magazines a month from cover to cover. He loved National Geographic, Discovery, and many others that intrigued him and expanded his knowledge of the world. Harold always had a love of music. In later years, he taught himself to play the harmonica. He had several harmonicas, each in a different key, and he enjoyed playing in Charlie’s Revue and the Tingley Kitchen Band. Harold was involved in the Tingley Meal Site and was the “official coffee pourer”. Harold loved to work jig-saw puzzles, crosswords and after he retired, he enjoyed taking care of the outdoor flowers. He had several walnut trees and would pick up and crack walnuts for hours; sharing the bounty with his family and friends.
On November 28, 2006, his beloved wife, Eloise, passed away. After a few years, Harold began sharing his life with Darlene Morgan. They enjoyed traveling and dancing, sharing meals and playing Pegs and Jokers.
Harold loved to visit and had many close relationships with friends and especially with his siblings. Many Thursdays were spent getting together with them. He had neighbors like the Petersohns and Overholtzers who checked on him every day.
Harold passed away January 31, 2015 while a resident at Clearview Home in Mount Ayr. He was preceded in death by his parents Ellree and Mary Brown; wife Eloise Brown; brother Max Brown; and granddaughter Megan DeLong.
Those left to cherish his memory include his children Jeff Brown and partner Debbie of Overland Park, KS, Julie Brown of Belton, MO, and Joni Robison and husband Roger of Bedford, IA; grandchildren Jacque (Landy) Brown, Joel (Erica) Brown, Jennifer (Keith) Moran, Heather (Tyler) Robison, John Geringer, and Tiffany DeLong; great grandchildren Jessica (Tyler), Alyssa, C.J., Isabella, Eloise, Johanna, Cage, Trip, and Molly; siblings Lieu (Jean) Brown of Prescott, IA, Ronnie (Deann) Brown of Grand River, IA, Gene (Peggy) Brown of Leon, IA, and Rosemary (Ronnie) Stark of Grand River, IA; sister-in-law Wilma Brown of Creston, IA; Special friend Darlene Morgan of Mount Ayr, IA; nieces, nephews, other relatives, and friends.
Open visitation is Thursday from 12 to 8 p.m. with the family present from 6 to 8 p.m.
Services will be at the Tingley Christian Church in Tingley at 11 a.m. Friday, February 6 wih Pastor Al Rusk officiating.
Casketbearers are Jacque Brown, Joel Brown, Jennifer Moran, Heather Robison, John Geringer and Tiffany DeLong.
Burial will be at the Tingley Cemetery with memorials directed to the Tingley Christian Church and the Tingley Meal Site.