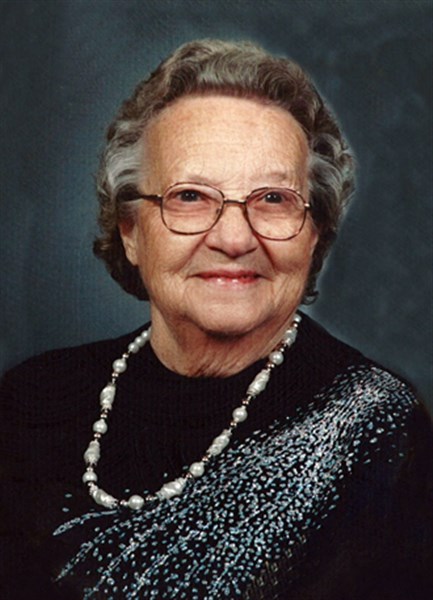 Marjorie Werner, 94, of Tingley, Iowa, passed away January 24, 2015, at the Mount Ayr Health Care Center in Mount Ayr, Iowa.
Marjorie was born December 4, 1920, in Lenox, Iowa, to Joshua “Joker” and Merzetta (Fender) Hillebran.  She attended school in Beaconsfield through the 11th grade.  She graduated from Tingley High School in 1938.  She married Elton Werner on March 16, 1941, in Shannon City, Iowa.  She spent most of her life in Ringgold County except for two years in California.
Marjorie helped Elton on the farm while also running the Southside Café in Tingley as well as cooking for other cafes in the area.  She also was a nurse’s aide and activity coordinator at the Mount Ayr Health Care for several years as well as being a Hospice volunteer for a few years.
Marjorie was a lover of music and dancing.  In her youth, Marjorie, her sisters and their father performed at many social events and dances.  In high school she played saxophone in a dance band on the weekends.  This love of music was later expressed through her leadership and participation with the Tingley Kitchen Band, Friday Singers and The Echoes.
Marjorie was a member of the Tingley Methodist Church and was also active in Republican Women’s Group, Evening Literature Club, Creative Writing, “T”-Club and the Tingley UMW.  She was a regular at the Tingley Meal Site where she loved playing bingo and washing dishes.
Marjorie outfitted many, many a friend with hand-crocheted slippers, hats, scarves, shawls and afghans.  When Marjorie was not crocheting, she was either reading or writing poetry and stories.  She never lost interest in current events or in sharing her opinion.
Those left to cherish her memory are her children Jeannette Buell of Plattsmouth, NE, Patricia (Rodger) Loudon of Minneapolis, MN, Carolyn Werner Sheldon of Mesquite, NV, and Jim (Ann) Werner of Diagonal, IA; nine grandchildren, twenty (one pending) great-grandchildren, and five great-great-grandchildren, a sister Pauline Murphy of Mount Ayr, several nieces, nephews, other relatives, and friends.
She was preceded in death by her parents, her husband Elton, sons-in-law Gary Buell and James Sheldon, and her sister Opal Webb.
Over the course of their 51 years of marriage, Elton and Marjorie had a positive impact on many youth, at times welcoming them into their home and raising them as their own.  Marjorie had a strong faith.  She touched the lives of many people of all ages throughout her lifetime.
Services were held at 11 a.m. January 31, 2015 at the Tingley Methodist Church and was officiated by Pastor Bruce Giese and burial followed in the Tingley Cemetery.
Pallbearers were Raymond Shields, Danny Rinehard, Claire Newton, Chuck Klejch and Mitch England.
Memorials may be directed to the Tingley Friendship Meal site, Tingley Methodist Church or the Tingley First Responders.