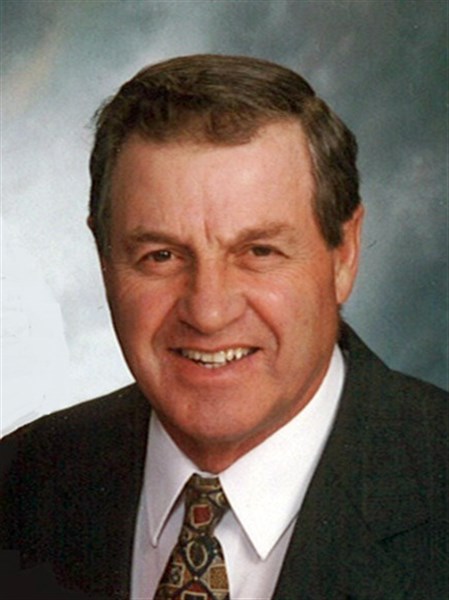 Richard Edwin Davison passed away on January 29, 2015.  He was born on December 24, 1934 to Harlan and Hilda (Mendenhall) Davison on a farm west of Hopkins, Missouri.  He married Carole Kay Cross on Easter, April 21, 1957 at the Wray Memorial Methodist Church in Hopkins.  To this union, four children were born – Diana, Brenda, Rodney and Robert.
Richard grew up on the farm and learned to do chores at a young age. He said he would sit on a lone seat, getting horses, Jen and Jute, to the field.  If he fell asleep, they would wait at the end of a field for him to wake up and tell them which way to go.
He attended a one-room school house through eighth grade and then went on to Hopkins High School. During his junior year, his father was injured in a farm accident and Richard had to take over farming, being the oldest child. He couldn’t keep up with farming and school so he stayed home to keep the farm going.
He entered the Army reserves in September, 1957 at Fort Leonard Wood, Missouri and spent six years in active duty until he was honorably discharged.
In the mid-1960’s, he entered his first tractor pull and won. He won many championships through the years. He gave it up for a while, but he re-purchased his pulling tractor and began pulling again with his sons. Then he turned it over to Rodney and Robert because he didn’t like the new rules of wearing a helmet, fire suit and roll cage.
The family moved to Maloy, Iowa from Hopkins in 1968. He was a steward of the land, and his passion was to do a lot of grain farming, being one of the first to contour farm. Soon, he had farmers wanting him to farm their land, so he did. Carole would have a lunch in the field with the family, and then grandkids would pile in the combine and ride with him. Life took a turn on him, so he had to step down a few years ago and turn the farming over to Robert.
Richard loaded the family up in the camper in the summers to see the country, but mostly traveling to the mountains and Canada. He and Carole began snowmobiling in the 1970s and went to Yellowstone for 36 winters. His kids all got to go at least once, as well as grandsons, Chad and Michael, and son-in-law, David and daughter-in-law Julie.
He served on the Maloy City Council for many years and was a member of several tractor pulling associations. He and Carole attended the Iowa State Fair annually.
Richard is remembered for his infectious smile, love of International equipment, Ford vehicles and successful farming.  He will be missed dearly by his family and friends.
He is survived by his wife, Carole of 57 years; his children Diana (David) Pedersen of Maryville, MO, Brenda (Jim) Jorgensen of Norwalk, IA, Rodney (Darla) Davison of Cosby, MO and Robert (Julie) Davison of Maloy, IA; eleven grandchildren and five great grandchildren; siblings Jack (Phillis) Davison of Macon, MO, Sharon (Sherrill) Swink of Udall, KS, Sue Dallas of St. Joseph, MO, Larry (Pam) Davison of Hopkins, MO, Terry (Marsha) Davison of Hopkins, MO, Joe (Lois) Hodge of Bedford, IA, Carl (BJ) Hodge of Maryville, MO; sisters-in-law Joyce Davison of Maryville, MO and Janice (John) O’Riley of Hopkins, MO.
He was preceded in death by his parents; parents-in-law Geral and Thelma Cross; his brother Kenneth Davison; his nephew Michael Hodge; brother-in-law Bill Dallas; and his step-mother Helen.
Services were February 2, 2015 at the United Baptist Presbyterian Church in Mount Ayr with Rev. Mike Maddy officiating.
Casketbearers were Chad Pedersen, Ashley Moss, Michael Jorgensen, Eli Jorgensen, Mikaela Fowler, Samuel Jorgensen, Jori Davison, Shelby Davison, Levi Davison, Laura Davison and Amber Davison.
Honorary pallbearers were Jay Monday, Curt Jackson, Wayne Kemery, Richard Elliot, Rod Shields, JC Ware, Karl Richard Coleman and Wilbur Noakes.
Burial was at the Hopkins Cemetery in Hopkins, MO. Memorials can be made to Alzheimer’s Foundation and HCI Care Services in Mount Ayr.