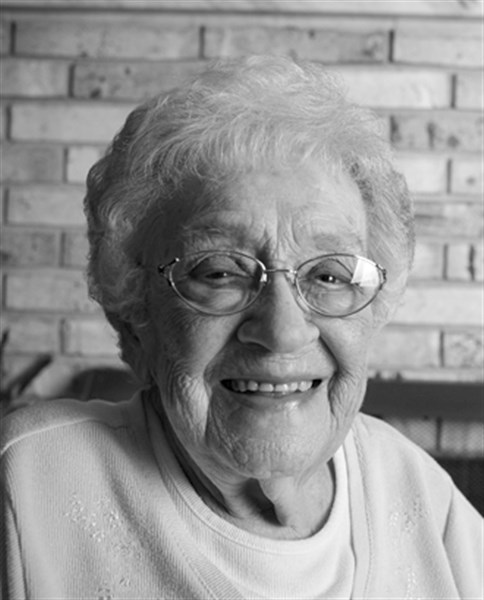 Helen Irene Bruner Lyddon was born July 5, 1919 at the Dan and Blanche Bruner farm with Mable Curry assisting with her delivery. She was the youngest of eight children. Helen graduated from Clearfield High School in 1937, teaching in the rural schools for four years. May 24, 1941 she married the love of her life, Daryl Sport Lyddon. In 1942, Daryl entered the service and served in World War II. Helen followed him when she could to Washington D.C., Florida, Washington State, and Denver, Colorado. During this time she would work at Dolecheck’s General Store in Clearfield; Palais Royal Dept. Store in Washington D.C.; and Look Magazine in Des Moines, as Expirations supervisor.
Helen considered herself a “farm manager”, carrying on the duties of the farm several years after Daryl passed away, and until son John could take over. Even then she continued to plot and chart the fields, driving to the farm whenever she could to check progress. She was one of the first single Iowa women to be given an award for soil conservation. The mother of a “special child” she was active in organizing the Sheltered Workshop in Creston. Helen shuttled students from Clearfield to Bedford so they could attend special ed classes not yet provided in Clearfield. She was the organizer and first director of congregate meals in Clearfield. She was an active member of the Clearfield Methodist Church and belonged to the Order of Eastern Star.
Grandchildren and great grandchildren, nieces and nephews were very important to Helen. She loved getting ready for the holidays. Grandma’s Chicken and Noodles were the best! During her later years, a quilt rack was set up in her living room, providing her hours of entertainment, and a piece of art in-between. A sweet smile on her face, Helen was a joy to be around. Helen passed away February 9, 2015 at Clearview Home in Clearfield, Iowa.
Left to cherish Helen’s memory are children Cheryl Dee Schild of Grinnell; John and Karla Lyddon of Clearfield; Janis and Jerry Henderson of Lenox; Cheri Lea Lyddon of Creston; grandchildren Chris Schild and daughter Tatum of Des Moines; Cory Schild of North Liberty; Clint and Keri Schild, Luke and Chase of Tucson; Colin and Sharon Lyddon, Sydney and Tristen of Grimes; Kelly and Ed Allee, EJ and Ashlynn of Diagonal; Aaron and Jolene Lyddon of Urbandale; Drew and Mandy Henderson, Owen, Carter, and Hope of Creston; Blaine Henderson of North Liberty; Brother-in-law Doyle Lyddon of Tampa, Florida and a host of nieces, nephews and friends.
Helen’s final two years were spent at Clearview Nursing Home, close to the farm she loved and where she was cared for by a loving and caring staff. A life cherished and well lived. Watson-Armstrong Funeral Home of Mount Ayr & Clearfield is in charge of her arrangements.
Services were held at the United Methodist Church in Clearfield with Rev. Shurmaine McAlpine officiating.
Casketbearers were Cory Schild, Clint Schild, Chris Schild, Aaron Lyddon, Colin Lyddon, Drew Henderson, Blaine Henderson and Kelly Allee.
Burial was in the Clearfield Cemetery in Clearfield.