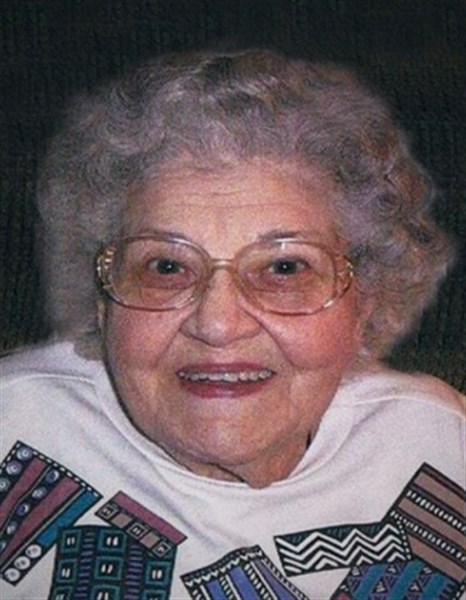 Byrlee Ramsbottom, 92, of Creston, died Thursday, February 26, 2015 at Crest Haven Care Center in Creston. Services will be 10:30 a.m. Monday at Powers Funeral Home in Creston.  Pastor Jim Morris will officiate.  Burial will be at the Graceland Cemetery in Creston, Iowa.  Open visitation will be from 1 – 5 p.m. Sunday with family receiving friends from 3 – 5 p.m. Sunday at Powers Funeral Home in Creston. Memorials are to be established.  Online condolences can be given at www.powersfh.com.
Byrlee Ramsbottom was born March 12, 1922 in rural Union County, north of Afton to Leslie L. Dixon and Iva (Kleinbeck) Dixon.  She attended Dodge #7 Platte Country School and graduated from Creston High School with the class of 1939. On November 21, 1939, Byrlee was united in marriage to Kenneth Charles Ramsbottom in Creston. They lived east of Creston, farming there until 1956 when they moved to Ringgold County to farm. In 1965 they moved back to Creston.  In 1973 Byrlee returned to her home east of Creston residing there until 1997 when she and Kenneth moved into Creston.
Byrlee worked with the clothing and retail industry starting in 1959 at Recknor’s Ready to Wear.  She then worked at Singer Sewing Machine Company in 1961; becoming a Singer dealer in 1975.  In 1975 Byrlee opened her first shop at her home in a spare bedroom then when it became too small, Byrlee opened her second shop on New York Avenue in 1976.  In 1977 she built and opened her third and final store “Byrlee’s One Stop Sewing Center” on Highway 34 and was the owner/operator until retiring in 1981.  She was very proud of her store.  Byrlee also enjoyed traveling, flowers, birds and all things of Mother Nature.  She always loved being a farm wife, mother, grandmother and loved her time spent on the farm.
Byrlee was a member of the First United Methodist Church in Creston, Eagle’s Lady Auxiliary and Antique Rustic Relics Model A & Antique Car Club.  She was the director of Highland #2 Country School, 4-H leader and secretary of Valley Chapel Ladies Aid.
Survivors include two daughters, Dixie (husband Joe) Scherff of Manly, Ia. and Rhonda Sue (husband Dwight) Giles of Greely, Colo.; and two granddaughters, Angela (husband Tracy) Taylor of Newton and Tricia (husband John) Otten of Lingle, Wyo; one great granddaughter Kelsey Mae Otten; sister-in-law Margaret Venable of Boring, Ore; special children: Donna and Ken Smith of Creston and Connie and Guy Carlson of Creston; along with many nieces, nephews, other family, special neighbors and friends and the Rustic Relics Model A & Antique Car Club. She was preceded in death by her parents, beloved husband Kenneth in 2005, son, Charles LeRoy Ramsbottom in 1961, her brother Leo (wife Gleah) Dixon, sister Rowena Dixon and brother-in-law Paul Venable.