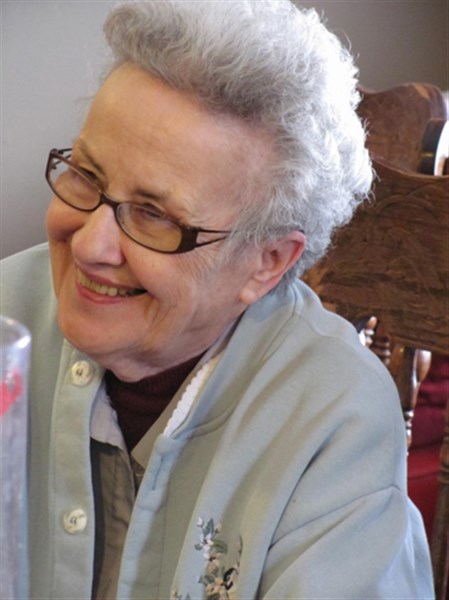 Vanita “Maxine” Drake Barnett was dearly loved for her wisdom, generosity and caramel pecan rolls. An avid reader and learner, Maxine often quoted Mark Twain and Robert Frost, and wore out the pages of her trusty dictionary, which was always by her side. She had no patience for hotheads or bullies, and stood up against racism and prejudice at every opportunity. She appreciated well-told stories, the correct use of “lay” versus “lie,” and fashionable shoes.
Born Feb. 21, 1927, on a farm in Mt. Ayr, Iowa, Maxine was the daughter of Guy “Raymonda” Drake Sr. and Lela Stephens Drake.
After first losing her mother and then her father, Maxine was lovingly raised by stepmother Georgia Saltzman Conant Drake, along with her siblings and stepsiblings: Guy “Raymond” Drake Jr., Robert Drake, Margaret Drake Cockrum of San Diego, California, Roger Conant of Phoenix, Arizona, Catherine Conant Thomas of Arlington, Texas, and Jerry Drake of Grant City, Missouri.
Maxine had a lifelong passion for education. Valedictorian of her high school class, she went on to graduate from Drake University, working three jobs to pay for her tuition and books. With her kind smile and no-nonsense approach, she was a teacher who commanded respect and admiration from students. She taught junior and high school classes for more than 40 years — instilling a love of reading in generations of Iowans and instructing them how to identify the active verb when diagramming a sentence.
As a young schoolteacher, she met a tall, ornery Navy sailor who had just returned from World War II to begin a career in carpentry. Theron “Pud” Barnett fell in love with Maxine the moment he met her. They eloped four months later on Christmas Eve and were married for 66 years. Early in their marriage, Pud and Maxine traveled through the South where construction jobs were more plentiful. Daughter Kathryn Sue Barnett was born in South Carolina and daughter Sherie Grace Barnett was born in Florida. It was during this time that Maxine added rattlesnake killer and hurricane survivor to her resume. When their daughters were old enough to attend school, Pud and Maxine returned to Iowa, where they would live the rest of their lives together in the home Pud built in Linden. Theirs was a partnership of love, respect and lots of teasing on Pud’s part and playful scolding from Maxine.
Pud lovingly cared for Maxine during the final years of her life, learning to do laundry, fry eggs and even run the vacuum—causing Maxine to boast on several occasions that you can indeed teach an old dog new tricks. Maxine died on Feb. 4, 2015, from complications of COPD. She spent just one night away from her home, with Pud at her side. Maxine is remembered for many exceptional qualities, including her soft hugs, strong shoulder on which many friends leaned, sage advice, fried chicken, and a bottomless snack drawer filled with the best candy.
She is survived by her loving husband Pud Barnett of Linden; daughter Katy Wirt and son-in-law Kevin Wirt of Panora, Iowa; daughter Sherie Barnett and son-in-law Steve Foritano of Des Moines, Iowa; grandchildren and grandchildren-in-law: Heidi and Steve Luett of Granger, Iowa; Keesia Wirt and Shawn Hanson of Des Moines; Troy and Keri Wirt of Jamaica, Iowa; Bandy and Kindi Wirt of Guthrie Center; Jenny Foritano and Sergio Buchanan of Des Moines; and Luke Foritano of Des Moines; and twelve great-grandchildren: Kael Dean Wirt, Mazian Drake Hanson, Theron Ann Luett, Hudson Steven Luett, Bourne Sutton Hanson, Irelyn Marie Wirt, Imersyn Scarlet Wirt, Maddox Robert Wirt, Violet Betty Hanson, Knox Barnett Wirt, Abel Dean Wirt and Jeniya Grace Buchannan.
A private service for family will be held at a later date. Please honor Maxine’s lifelong commitment to learning by donating children’s books (Maxine always favored the classics!) or contributions to the Maxine Barnett Library Fund at Gigi’s Playhouse, 6507 University Ave., Windsor Heights, IA 50324 or donate online at gigisplayhouse.org/desmoines. Gigi’s Playhouse provides tutoring and other services to individuals with Down syndrome.