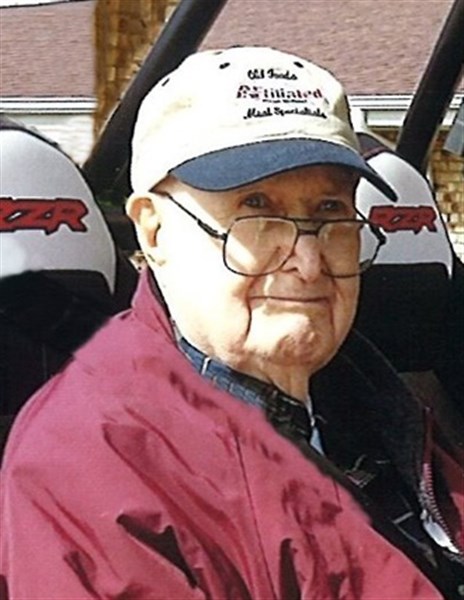 Earl Kenneth Brand was born December 10, 1924 on a farm in Union County to Lewis and Madge Crittenden Brand.
He attended country school in Union and Ringgold County. He graduated from Mount Ayr High School in 1943. He took teacher training, passed the state boards, and received his teaching certificate. He didn’t begin teaching as this was during WWII and one of his brothers was drafted and serving in the army. Earl was deferred from the army because he was needed to help on the farm with his dad and brothers.
After the war Earl moved to Chicago to do carpentry with his cousin. Several years later he returned to Mount Ayr and did carpentry with his dad until he retired. Earl enjoyed fishing, hunting and reading. He was an avid coin collector. He enjoyed going to his nephew’s wrestling meets both in Mount Ayr, other schools, and even to the state tournaments.
He spent time at his brother, Clyde Brand’s, Standard Station playing cards. He was later the manager of the “Dead Beat Club” enjoying many hours of cards and pool with his friends. Earl also worked at CGI.
After the death of his mother and brother, Dean, in 1995, Earl moved to Polk Villa where he lived until moving to Mount Ayr Health Care Center in 2009.
Earl passed away Wednesday, March 4, 2015. He was preceded in death by his parents; brothers Harold, Clyde, and Dean; sister Margaret; brothers-in-law Bob Schafer, Lyle Gilliland, Ainslee Triggs and Walter Cobb.
He is survived by his brothers Paul (Georgia) Brand, Lee (Shirley) Brand; sisters Lois Triggs, Wilma Schafer, Jean Gilliland, and Betty Cobb; and sister-in-law Ramona Brand. He was also loved and will be missed by 23 nieces and nephews, many great nieces and nephews and a host of friends.