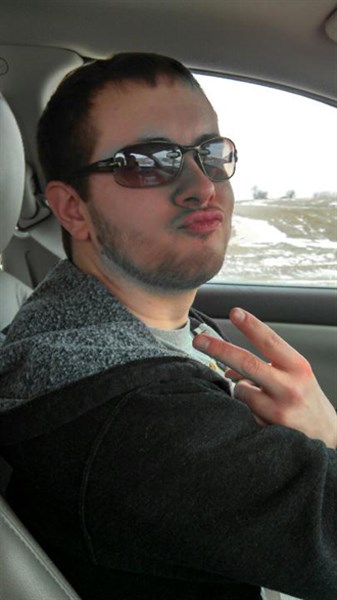 Forest Colt Cropper was born on the Llano Estacado of Amarillo, Texas on May 4, 1992 to Sherri Lynn Cropper and Michael Leroy Barnes.  Forest grew up with his half siblings near Canyon and Fritch, Texas enjoying family canoe trips and nature exploration at Lake Meredith.  After relocating to the Midwest, Forest returned to public school after several years of home schooling to attend school at Eagleville, Missouri and later graduating from Mount Ayr High School in 2010 where he excelled in art and academics.
Forest made many friends while working at Hy-Vee, spending time with them in the simple pleasures of video gaming, knife collecting, target shooting, and archery.  Forest met Jacynda Fern Brand (Cyndi) on September 29, 2011, and they became engaged on February 14, 2015.  Forest planned to return to college in the fall of 2015 and marry in the summer of 2016.  Forest was a kind, gentle soul.  He cared deeply about many issues, and loved those he cared for without reserve.  He wanted to help make the world a better place and tried to comprehend the obstacles of that goal.  Forest loved simple pleasures like going for a drive, cooking a meal for his friends and family, fishing a local pond, or just hanging out with some “bros” and some beers, throwing knives, and enjoying what he called “Good Times.”
Forest left this world on March 19th, 2015 at his family home near Redding, IA to seek his destiny beyond what we all know.  He is preceded in death by his maternal grandparents, Mildred and Wesley Cropper, and Horst Thomas Lesch; and his paternal great grandmother, Emma Barnes.
Forest will be missed immeasurably by his surviving family members including his fiance, Cyndi Brand; his parents, Sherri Cropper and Michael Barnes; his siblings, River Raven Cropper, Winter Wolf Cropper, and Zachary Leroy Barnes (and family) of Clayton, NM; his aunt and uncle, Tamara and Steven Beres (and family) of Fritch, TX; his paternal grandparents, Rosemarie and Raymond Barnes of  El Paso, TX; his maternal step-grandmother, Judy Lesch of Leesburg, AL and maternal biological grandmother, Sandra Lesch of Amarillo, TX; along with many extended family members and cherished friends.
Forest wanted more than anything to bring family and friends together. And he succeeded in this as much as any one human being can.  Forest wanted us to reach out to each other and not just touch, but hold on.  Hold on to each other.
Eulogy and memories will be shared by Rev. Edward Shields 3 p.m., Sunday, March 29, 2015, at Watson-Armstrong Funeral Home in Mount Ayr. In lieu of flowers, a memorial fund has been established in his name to be decided later. Online condolences may be left at www.watsonarmstrongfh.com.