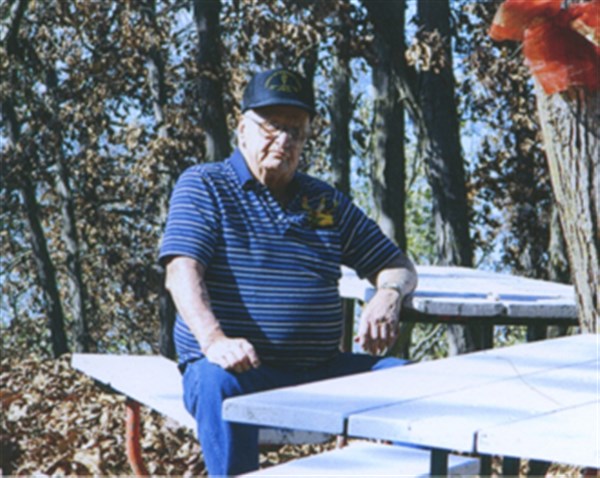 Robert Eugene Adams passed from this life on April 10, 2015 in Mount Ayr, Iowa. Bob was the youngest of six children when he was bom to Robert Bruce and Minnie Belle Adams on August 17, 1932 in Jackson, Missouri.
Bob married his bride Betty Giger of Rockford, Illinois on August 10, 1951. They spent their lives together and raised five children. Bob provided for his family as an over the road truck driver for many years. He also spent time as a welder and was privileged to help build the St. Louis Arch during his younger days. They moved around several times in the early years of their marriage and finally made the farm north of Kellerton their home in 1977. It was on the farm that many memories were made.
Bob enjoyed working on the farm raising cattle and other various types of livestock. Everything on the farm had a name, very carefully picked to fit its personality or perhaps, its purpose! Bob and Betty loved working in the yard planting flowers and trees in the summer and at Christmas time you could always count on a large display of lights and figurines in the yard. The grandkids would visit for holidays, and long weekend stays in the summer.
It was always exciting to visit Grandpa Bob because a new adventure always awaited. From motorcycle rides to the Dari Sweet for an ice cream cone, to fishing trips down a back road, to the newest exotic animal in the backyard, he always was full of surprises. Bob loved to spend time with his children playing cards and talking late into the evening. He was always the first up the next morning drinking coffee quietly in the kitchen while everyone else rested for another day of exciting adventures on the farm. In the later years of his life. Bob spent many days and nights at Loch Ayr Lake in Mount Ayr. It was his favorite place to spend time with family and also to quietly reflect on things. He loved to take people for “just two more laps around the lake” in his boat during the day and sit around the fire at night while waiting for the fishing lines to move.
Left to treasure Bob’s memory is his wife Betty Adams, one sister Betty Lou and Jesse Sharp of Kellerton, his five children, daughter Kathy and husband Dan McLain of Mount Ayr, daughter Barb and husband Walt Collis of Kellerton, son Robert Adams Jr and wife Linda of Council Bluffs, son John Adams of Kellerton,  daughter Hope and husband Dan Jackson of Kellerton, seven grandchildren, and 13 great-grandchildren, Bob El-Halhuli and wife Dalania, and son Tyler Star of Seattle, WA, Shama Hughes and children Sami and Johnny of Portland, OR, Scott Adams and wife Randi and children Lilly and Madison of Council Bluffs, Brandy and husband Tracy Anderson and children Alexa and Allison of Mount Ayr, Jennifer and husband Tim Creveling and children EmmaLeigh and Easton of Ellston, Darrell Adams and children Makhia and Zaine of Council Bluffs, Kari and husband Charlie McQueen and children Oakley and Abbigale of Kellerton, and many more extended family and friends. Preceding Bob in death is his parents Robert and Minnie Adams, sister Anna Belle Oldham, brother William Adams, sister Pauline Roger, and brother Farris Adams, and infant son Gary Adams.
A celebration of Bob’s life will be held for family and close friends at a later time. Iowa Cremation of Cedar Rapids is in charge of arrangements. Please send condolences to his wife Betty. A memorial will be established in his name.