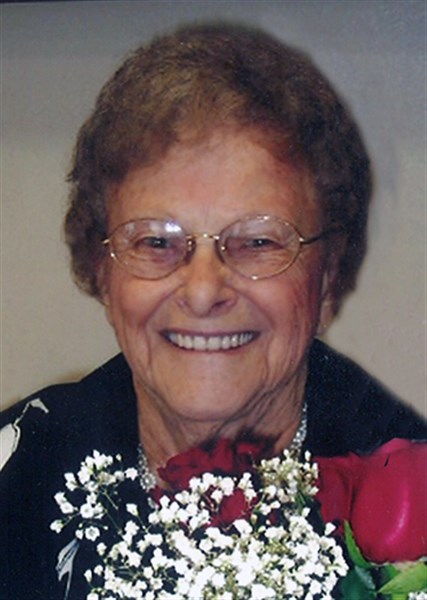 Ruth Hazel Stewart Egly was born at home in Ellston, Iowa on January 15, 1925 to Lela Viola Olson Stewart and Amos Ray Stewart and departed this life on April 30, 2015. She was welcomed by three brothers: Thomas Vaughn, Aden Rae, Charles Eugene and one sister, Nieda Marie and was later baptized at the Ellston Methodist Church.
When Ruth was five years of age, her family moved to a farm near Ellston and in 1943, she graduated from Ellston High School. After high school, she was employed for three years in the kitchen at the Ellston School. In the evenings, Ruth and a good friend wallpapered for families in Ellston. She also enjoyed helping residents set and style their hair, occasionally earning a nickel, dime or quarter.
Ruth married John William (Bill) Egly and to that union six children were born: Nieda, Billie, Katherine, Barbara, John and James. Ruth and Bill raised their six children on a farm between Mount Ayr and Kellerton. Milking cows, raising chickens, growing a garden, sewing, cooking and canning food for her large family were among her many tasks as a wife and mother. Her children fondly recall her homemade chocolate cake made with cream straight from the Holsteins, cinnamon rolls, canned peaches and “roasting ears” – all enjoyed around the family’s large round oak dining table. Ruth also enjoyed weekly card parties with neighbors, going to Club, and attending dances and movies on occasion.
In 1963, Ruth began a long career with Clearview Nursing Home as a Certified Nurse Assistant (CNA) until her retirement in 1984. After that, she worked for several months as a private nursing assistant for a Ringgold County family. Her life was filled with hard work and dedication to both her own family, and many others in the community.
Ruth moved to Polk Villa Apartments in Mount Ayr in 1985 where she resided until 2004 upon relocation to Heritage Apartments. For twenty years, she volunteered at the Neighborhood Center, doing what she did best, helping others. She also volunteered at the Blood Bank for several years.
In her spare time, Ruth loved to sew, and everyone in her family and community knew about Ruth’s beautifully-crafted towels, crocheted doilies and embroidered pillowcases. She loved to “stay busy” and believed that “if you have something that needs done, do it today – not tomorrow.”
Ruth so loved her children, grandchildren and great grandchildren. She was preceded in death by her parents, brothers and sister, husband “Bill” and son John William. Her cherished memory will live on through her loving family and treasured friends.
The celebration of Ruth’s life was held at the Watson-Armstrong Funeral home on Monday, May 4, 2015 at 10:30 a.m. Pastor Bill Armstrong officiated the service with Nancy Sackett, Mary Davenport and Margaret Bickers providing the music.
Casketbearers were Trey Sucher, Pat Sheil, Billy Egly, Jim Egly, Jim Stuck, and John McFarland. Committal was in Maple Row Cemetery in Kellerton, Iowa. Memorials in her name to be decided later.