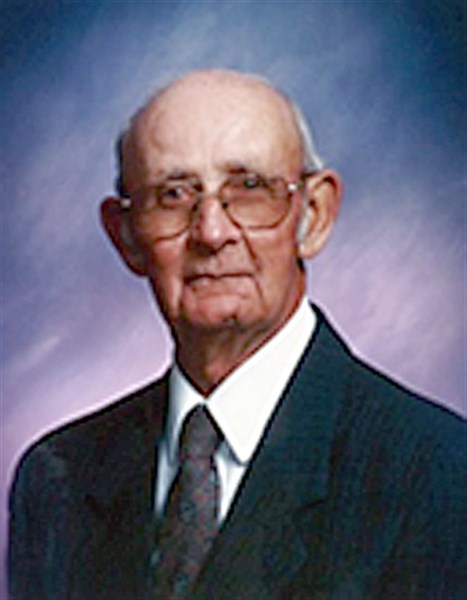 Gilbert “Bill” Samuel Webb, Jr. was born December 5, 1926, on a farm near Mount Ayr, Iowa to Gilbert and Edna (Surface) Webb. Bill went to be with the Lord on June 5, 2015, at the age of 88. Gilbert attended school at Shannon City, Iowa through the 7th grade and then attended 8th grade at a country school called Silver Point. In 1946, he graduated from Mount Ayr High School. Following graduation he farmed with his father and brother.
On August 10th, 1947, Bill was united in marriage to Norma Jean Baker. They purchased a small farm south of Tingley, Iowa. It was there that seven children arrived to bless their home. Gary Leigh, Stephen Craig, Cynthia Ann, Michael David, Janelle Kaye, Gilbert “Sam” Samuel III and Rose Mary.
Bill accepted Christ at an early age. He and his family attended the Nazarene Church at Diagonal. He was a lay pastor until a full time pastor was called. He was also youth pastor. Bill worked 10 years at Ringgold Co. Hospital, operating the high pressure boilers and as a custodian. In 1967 the family moved to Zearing, Iowa where he worked for the school. In 1969, they moved to Adel, Iowa. There he had several different jobs. He worked for Farm Service, Dallas County Courthouse, Adel Elevator and drove a school bus for 14 years. He drove the sports bus at night and enjoyed watching the kids play. He loved them and they loved him. He was an avid St. Louis Cardinals fan and knew the names and positions of each player. He also was a big Iowa Hawkeye fan.
When his eyes began to fail, he gave up the bus driving and started working at Adel Green House (Harvey’s) until he retired at the age of 80.
In 1991, Bill and Norma joined the Nazarene Church in Des Moines and were very active until 2007 when they sold their house in Adel and moved to Tingley, Iowa. He was active at the Tingley Mealsite, attended Ellston Methodist Church and enjoyed the Sunday School class.
In August 2014, because of failing health, they moved back to Adel to be closer to their daughters, grandchildren and great-grandchildren. They attended some of the activities of their grandchildren and great-grandchildren. His family was the love of his life and he was a dedicated prayer warrior for his family.
He leaves to mourn his passing; his wife, Norma; four sons, Gary (Sonja) Webb, Stephen (Marcia) Webb, Mike (Donna) Webb and Sam (Brenda) Webb III; three daughters, Cynthia Golightly, Janelle (Rick) Taylor and Rose Mary Aubert; one sister, Barbara Yaeger; 19 grandchildren; 32 great-grandchildren; 8 step-great-grandchildren. Preceding him in death were his parents; 3 brothers; 4 sisters and son in-law, Greg Aubert.
To my family I will be waiting just inside the Eastern Gate to welcome you all.
Services were held at the Watson-Armstrong Funeral Home in Mount Ayr, Iowa on Wednesday, June 10, 2015 at 10:30 a.m. with Pastor Del Rittgers officiating. Casketbearers were Jon Webb, Mathew Webb, Seth Webb, John Golightly, Chris Webb, Shane Webb, Mickey Webb, Ricky Webb, Adam Webb and Joshua Webb. Honorary casketbearers were Christy Ragland, Jessica Clingfrost, Mary Harrison, Amy Webb, Emily Brueck, Becky Baker, Tanya Webb, Jennifer Clark and Nicole Aubert. Burial is in the Benton Cemetery at Benton, Iowa. A memorial fund has been established in his name.