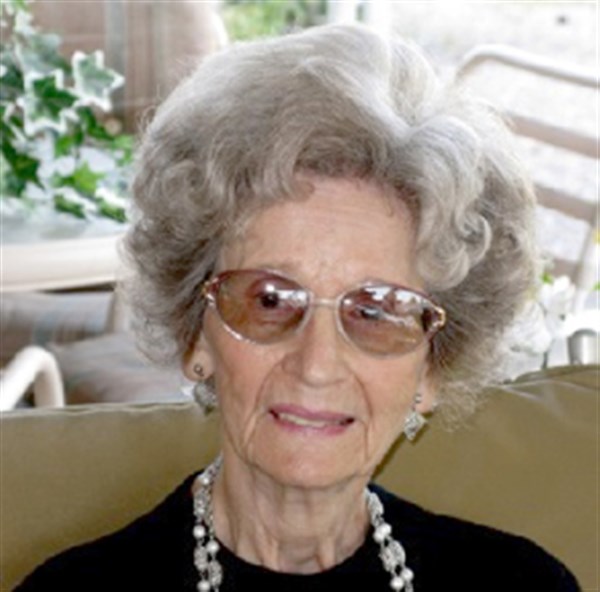 Frankie Ellen Meacham passed away peacefully June 29, 2015 at Casa de la Luz Hospice in Tucson, Arizona after a short 2 day stay.  She was born on September 13, 1925 in Harrisburg, Illinois.  She is survived by her son, Chuck and wife Marlys, sister, Margaret Smenyak-Wright and husband Bill and numerous nieces, nephews, cousins and friends.  Frankie was preceded in her death by her husband Chuck, Mother and Father Frank and Nellie Staffey, sisters Mary Lou Chessie, Almeda Leitch, and her beloved Grandmother Pearl Staffey who raised her.
Chuck and Frankie were married for 63 happy years before his death in June of 2010.  Her life-long career was nursing.  As a 2nd grader Chuck remembers his Mom walking 2 miles to work at the Holden Hospital in Carbondale, Illinois.  She also worked at a hospital in Freeport while living in Shannon, Illinois.  When her husband Chuck was transferred with the Continental Telephone Company to Mount Ayr, Iowa, she became the surgical technician at the Ringgold County Hospital. Many who worked with her commented that she ran the surgical department and kept the doctors in line!  To her credit and tenacity, one of Frankie’s greatest achievements was completing her LPN degree at the age of 50.
Besides being an avid spectator at all of Chuck’s school sports, Frankie enjoyed fishing, camping and being outdoors.  She enjoyed cooking and eating the fish as much as catching them.  She did an excellent job cooking wild game which was a delicacy in the Meacham family.  Chuck credits his Mom for his start as a taxidermist, helping him mount his first archery Whitetail Deer at the age of 12 on the kitchen table.  Chuck remembers when his Mom shot a Whitetail doe at the Game Area.  She had climbed 12 feet up to a tree stand before making the shot.  A good friend Steve Clemens reminded me of the time we put a 5 foot Bull Snake between the front and screen door and she hardly flinched.  We were so disappointed.  Marlys remembers several fishing/hunting trips to Canada with the family.  Particularly one when it snowed on June 1st and we had to move from our tent to a cabin.   Frankie never complained once.
They left Iowa in 1983 to be closer to Chuck and Marlys in Tucson, Arizona.  Frankie worked for The Nursing Service helping patients in their home until January, 1992, when she retired due to an eye injury.  Both loved the Arizona weather and enjoyed camping and fishing in the winter and spring, catching hundreds of crappie over 1 ½ pounds.  We had an assembly line to clean the fish and all of us enjoyed the fried fish and hush puppies!
In her retirement, she loved cooking, baking, being with her dogs, yard sales and Saturday morning estate sales where she was a familiar face and became notorious for never paying retail.
“Mom was always there when I needed her and never complained.  A very private person who felt fortunate for everything she had.  I couldn’t ask for a better Mom and friend.”
A private memorial for both Chuck and Frankie will be held at a later date.