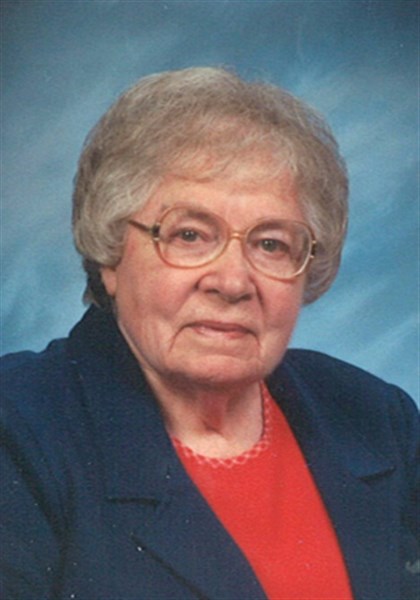 Vera LaViece (Main) Barker (known to everyone as LaViece) was born on February 27, 1920 on the Main family farm in Liberty Township in Ringgold County Iowa. She was one of 11 children born to the late Corwin Earnest Main and Mabel Mae Wood Main. She attended country school through the eighth grade and graduated from Mount Ayr High School in 1938 and had the honor of being the class valedictorian.
After high school, LaViece worked a year as a housekeeper and cook for the Bennett family in Mount Ayr who at the time had a child aged 4 months who grew up and became a long time Ringgold County Sheriff. The next year LaViece took a job in the Ringgold County Courthouse as assistant to the director of the welfare office. She kept that job for three years until she was married and her younger sister Doris took over her position.
On November 3, 1941 at a simple ceremony in the Methodist Church in Maryville, Missouri, LaViece was united in marriage with Clarence A. Barker. They lived for a short time in Mount Ayr where both worked. Their first child, a beautiful daughter named Barbara Kay, was born there. Soon, Clarence and LaViece left the “city” to take over the job of farming the Harry Barker Farm west of Benton, Iowa. From 1945 to 1951, they were blessed with five more children-David Clair, Karyn Anne, Dan Allen, Lana Marlene and Rita Kathleen. There are memories of hard work and disastrous weather, but ultimately the memories are uplifting and involve the healthy freedom to explore, the ability to learn something new every day and the unconditional love we always received from our hardworking mother.
LaViece was always kind to anyone and everyone. She wasn’t shy but may have seemed so at times. She was quiet and observant—but when she spoke, she could heal aching souls and calm misunderstandings and fear with just a few well phrased words. She never failed to know just the right thing to say. Her children, grandchildren and great-grandchildren know that exceptional lessons were learned just from her patient unconditional love and humble example. LaViece believed in the human spirit, in redemption and in the non- judgmental action of putting oneself in another’s place to gain an understanding of their needs. She taught us that sometimes our own selfish needs aren’t the most important. And she was a great teacher because she taught by example without a drop of ridicule or humiliation. Though small in stature, she could reach the heavens with her spirit.
LaViece got great joy out of helping with community activities such as church and 4-H in Benton and Mount Ayr, and she loved baking, cooking and sewing for others. She will always be known for her pies (she could whip up six pies—no problem), brownies, melt-in-your-mouth pumpkin bread, angel food cake, homemade noodles—and the list of great culinary delights is endless. The quilts she embroidered for newborn family members are priceless treasures.
LaViece Main Barker passed away peacefully on July 12, 2015 at the age of 95. Preceding her in death were; Clarence A. Barker-her loyal and loving husband of 59 years (1912-2000): parents Corwin and Mabel Main; sisters Phyllis Louise-who died in 1934 at the age of two, Maxine L. Kendig in 1996; Arlene Marie Kimball in 1998; Mildred H. Sobotka in 1998; and Doris Mae Rule in 2014; two brothers: Marvin in 2011 and Virgil in 2013: grandsons; Nathan Wesley Hunter and Mark Allen Stone, son-in-law Raymond Stone and a special brother-in-law Marshall Barker.
She is survived by her six children: Barbara (Garold) Canny, David (Carol) Barker, Karyn Stone, Dan(Jeannie) Barker, Lana (Richard) Gibson and Rita (Larry)Hunter: fourteen grandchildren: Linda (Gary) Klejch, Monica (Steve Reppertinger)Stone, Brian (Jennifer) Canny, Stephen (Shelly) Gibson, Lisa (Jon ) Han, Leslie (Ramez)Salamah, Lance (Jill) Barker, Malinda (Kevin) Thomas, Stephanie (Curtis) Reinke, Heather (John) Veach, Erin (William)Sylvester, Allison Hunter, Michelle Marchesano, Michael (Kimberly)Barker,and Sean (Song)Barker: one sister; the California artist Juanita Shaffer (who is one year older than LaViece), and two brothers; Larry (Fran)Main and Lyle(Virginia)Main. Also left to honor her memory are seventeen great-grandchildren and one great-great grandson; two very special sisters-in-law; Lucille Main and Guelda Barker; many nieces and nephews—every one of whom she loved dearly.
A few years ago LaViece answered some questions about her favorite things and wrote them into a little book and these beg to be shared. Ten of LaViece’s favorite things: Flower-the rose, Color-blue, Song-Whispering Hope (Soft as the Voice of an Angel), Dessert-ice cream (especially Dari Sweet), Food-vegetables (the best ones were from her huge garden), Sport-basketball (especially Iowa State and Iowa-she missed very few of those games), Activity- embroidery, Bible verse-John 3:16 (For God So Loved the World), Clothing-a light green voile dress with white polka dots and a tiered skirt (her mother made it for her eighth grade graduation and she treasured it and wore it for years), and Animal-dogs (which surprised us since she fed an army of cats and kittens every day on the farm and knew the personalities of each one).
Services will be held at Watson-Armstrong Funeral Home in Mount Ayr, Iowa on Monday July 20, 2015 at 10:30 a.m. with Rev. Terry Roberts officiating. Burial will be at the Benton, Iowa Cemetery after the services. Open viewing will be on Sunday July 19, 2015 from 12 noon to 8 p.m. with the family present from 5 to 7 p.m. on Sunday afternoon.
Pall Bearers are her grandsons; Michael Barker, Sean Barker, Brian Canny, and Lance Barker, Stephen Gibson, with sons-in-law; Richard Gibson and Larry Hunter.
Memorial funds have been established in her name to HCI Care Services in Mount Ayr and the Mount Ayr Senior Citizen Activity Center.