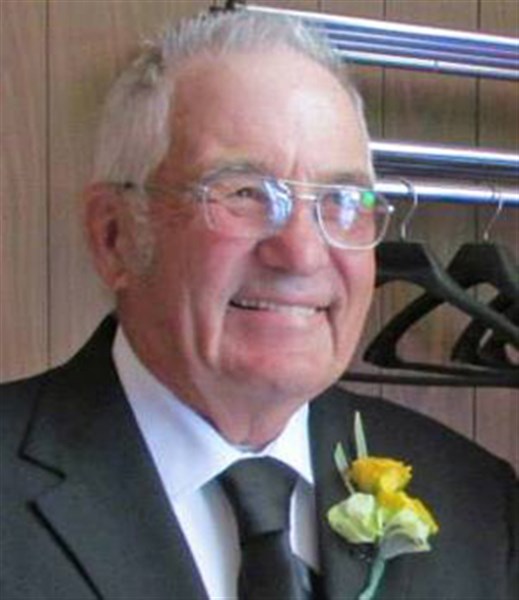 Ronald A Simpson was born on December 28, 1939 in Creston, IA to Rex A and Helen Mickle Simpson. He passed away on August 17, 2015 at the age of 75. Ron graduated from Shannon City High School in May of 1957 and attended Iowa State University. He lived his entire life on the family farm outside of Shannon City, farming and dairying, first with his dad, Rex A, and family and later with his wife and daughters.
Ron was united in marriage in Creston, IA to Karen Elaine Henry on February 19, 1961. To this union, two daughters were born, Kimberly Lynn and Deborah Lou.
Ronnie enjoyed dancing, bowling, 4-H leadership, the Shannon City and Creston Live Nativity scenes, judging Dairy, Dairy Goat and bottle calf shows, driving an East Union school car and the Ellston Bell Choir. He was a member of the Salem Lutheran Church and the Shannon City Community Church and was a baptized believer in Christ. Ronnie gained much enjoyment from visiting and developing meaningful friendships with people of all ages and found something positive in all of God’s creation. His family meant the world to him, and his love for them was never in doubt.
Left to celebrate his life are his wife of 54 years, Karen of Shannon City; daughter, Kimberly Lynn Kopke (Mark) of Amarillo, TX; daughter, Deborah Simpson Thummel (Jeff) of Sheridan, MO; brother, Mike Simpson (Beverly), Chatfield, MN, sister, Carol Oliver, Lacona, IA; sister, Mary Lou Cheers (Ron), Afton, IA; five grandchildren, Jennifer Long, Amarillo, TX; Montana Kopke, Amarillo, TX; Austin Thummel (Kylee), Parnell, MO; Chase Thummel, Sheridan, MO and Sydney Thummel, Sheridan, MO; one great grandson, Kipton Thummel, Parnell, MO and several cousins, nieces, nephews, a cherished Aunt Helen (Mickle) Davis and many, many friends from all facets of his life. Ron was preceded in death by his parents, Rex A and Helen (Mickle) Simpson and a brother in law, Jerry Oliver.
Funeral services will be 10:30 a.m. Friday, August 21 at the Shannon City Community Church with Pastor Lila Greene officiating. Burial is in the Oakland Cemetery in Shannon City. Music of “How Great Thou Art” and “The Lord’s Prayer” will be provided by Pam Palmer, Sheri Plough, and Doug Wilson. Casketbearers will be Mark Kopke, Jeff Thummel, Austin Thummel, Chase Thummel, Jack Thummel and Jim Simpson. Honorary Pallbearers are all family and friends in attendance. Open viewing will be held at Watson-Armstrong Funeral Home in Mount Ayr on Thursday, August 20 from 12:00 p.m. to 8:00 p.m. with family present Thursday evening from 6:00 p.m. to 8:00 p.m.
Memorials may be made to the Union County 4-H Foundation, as Ron and Karen met through 4-H, and/or the Shannon City Community Church Camp fund in order that young people from the community might have the opportunity to learn more about Christ.
Online condolences may be left at www.watsonarmstrongfh.com.