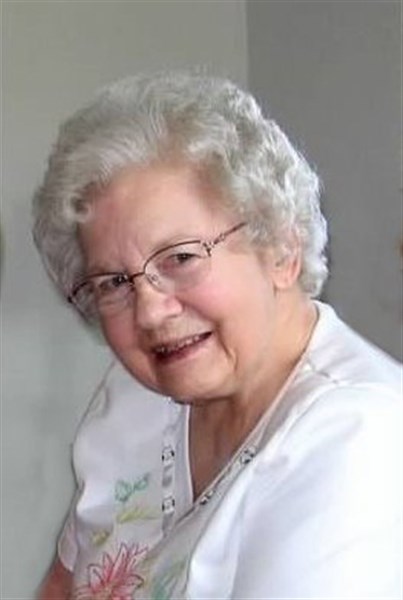 Nioma Gaule passed away August 29, 2015 at Clearview Home in Clearfield, IA at the age of 91.
Nioma Lane, the first of three children, was born October 20, 1923 to Isaac Reuben and Almina Baker Lane on a farm 1 mile east on the cemetery road and 2¾ miles north of Clearfield, IA. She attended Clearfield Community Schools, graduating with the class of 1941, where she enjoyed singing and playing in the orchestra and the band. After graduation, Nioma spent several years working at the AAA office in Bedford, IA. Earl Edwin Gaule from Blockton, IA was engaged to Nioma prior to his service in World War II. Following his return, the young couple was married on August 14, 1946 in Troy, KS. The couple purchased their first home in Clearfield at the NW corner of Van Buren and 5th Street and welcomed their first two children, Gary Lynn and Deanna Kay. The little family then moved to their next home at the SW corner of Washington and 5th Street. At this location they welcomed Alvin Eugene. Nioma was a stay-at-home mother, nurturing her family and demonstrating her devotion for the church and community through her volunteerism. She was a dedicated and loving caregiver for her parents and in-laws, her husband and her childless aunts and their spouses. Becoming a grandma brought great joy to her life, and she took pride in each grandchild’s accomplishments.
Nioma was an accomplished pianist and gave lessons to many young people from the Clearfield area. She served as a pianist at the Clearfield Christian Church from 8th grade into her 60s. In 1982 Nioma was honored and proud to serve as the pianist for the Clearfield Centennial Choir. Through the years, she also ministered to many families through her music at the weddings and funerals of their loved ones. Nioma was a proud American and served in leadership positions in the local and county American Legion Auxiliary. For many years, Nioma and Earl attended the Iowa State Legion and Auxiliary conventions. She also was a member of the MLC (Modern Literary Club), CWF (Christian Women’s Fellowship) and VFW Auxiliary in Creston.
Nioma is survived by her children, Deanna (Harlan) Davenport, Round Rock, TX, Alvin Gaule (Dorene Rusk), Creston, IA, and six grandchildren, Craig Davenport (Brenda Fink), Stoney Gaule (Tracie Johnston), Gary Gaule, Jr, Travis Gaule, Stefanie Davenport Beeman (Robert), Teresa Gaule Welch, (Andrew), seven great-grandchildren, and numerous nieces, nephews and cousins.
Nioma was preceded in death by her parents, Almina (January 1950), Reuben (December 1951), her husband, Earl, (March 2003), son, Gary, (December 1989), daughter-in-law, Mary Geruntino Gaule (May 2013), sister and brother-in-law, Beulah (Kenneth) Wilson, brother and sister-in-law, Donovan (Kathryn Poore) Lane. Nioma was the last surviving member on both sides of the family. Those preceding her in death from the Gaule side of the family are her parents-in-law, Mary (Perkins) and James Gaule, brothers and sisters-in-law Bertha (Carl) Tamerius, Clifford (Leota Knight) Gaule, Lloyd (Josephine Mavis) Gaule, Mabel (Howard) Wood, Darlene (Denzel) Mobley.
The family would like to thank the Clearview Nursing Home staff for their care and dedication to Nioma these past 14 years.
Services were held at the Clearfield Christian Church on 1 p.m. Tuesday September 1, 2015 with Pastor Tim Maxa officiating and Becky Nelson and Mary Ellen Spurrier providing the music. Pallbearers were Gary Gaule, Jr., Teresa Welch, Craig Davenport, Stefanie Beeman, Stoney Gaule and Travis Gaule. Burial is in the Clearfield Cemetery at Clearfield, Iowa.