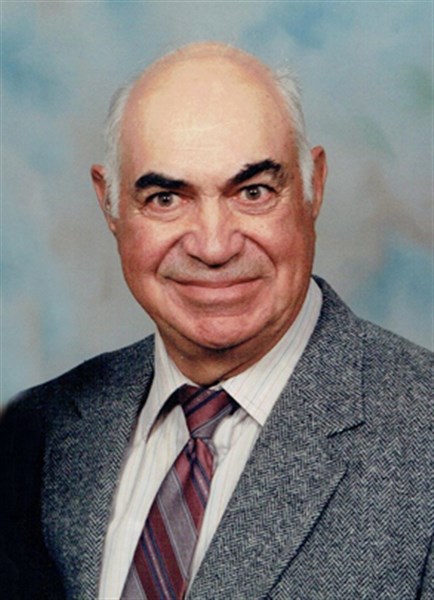 Glenn Ivan Gardner, 95, died peacefully at the Greater Regional Hospice House in Creston, Iowa, on September 21, 2015. He was born June 5, 1920 in Ringgold County near Tingley, Iowa to Roy and Madge Gardner. He graduated from Mount Ayr High School in 1938. After high school he worked on the family farm and as a farmhand near Tipton, Iowa. He then joined his uncle in the construction of power plants in eastern Nebraska. He later worked in construction in Idaho.
In January of 1942 Glenn entered the Army, where he was a supply sergeant with the 35th Division, Third Army in France, serving in Normandy, Orleans, St. Lo, LeMans, Chatterdon, and on the German Border. On December 11, 1944 while moving supplies to the Saar River, his jeep was destroyed and Glenn was seriously injured. Due to his injuries, he was awarded the Purple Heart as well as the following citations: Combat Infantry Badge, Expert Infantry Badge, ETO Ribbon, and three Battle Stars. He was honorably discharged from the United States Army on June 11, 1945.
On June 9, 1946, Glenn married Alice Deane Waugh in Shenandoah, Iowa. Alice and Glenn lived in Crete, Nebraska, near Mount Ayr, and Diagonal. He worked as a mechanic in Adel, Iowa for one year before purchasing the farm in Union County near Arispe, where he farmed until he retired in January of 1981. He was a member of the Arispe Methodist Church and a member of the VFW.
He was preceded in death by his parents, Roy and Madge, his wife, Alice, an infant son, Stephen, and two brothers, Gerald and Marion.
Left to cherish his memory are his children Nancy (John) Kunze, Alan (Connie) Gardner, David (Sue) Gardner and Sharon Gardner; eight grandchildren Julie Kvasnicka, Matt Gardner, Melissa McVeigh, Diana Kunze, Josh Kunze, Sara Gardner, Ellen Gardner and Ross Gardner; and seven great grandchildren. He is also survived by two brothers Wayne Gardner, Dean Gardner (Jackie); sister-in-law Carolyn Gardner, and many nieces and nephews.
The injuries Glenn sustained in service to his country made it difficult for him to enjoy many things others take for granted and macular degeneration robbed him of the ability to read in his last years, but he remained a man of quiet dignity until his passing.
Services will be held at the Watson-Armstrong Funeral Home in Mount Ayr, Iowa on Friday, September 25, 2015 at 10:30 a.m. with Pastor Jim Morris officiating and Don Wilson providing the music. Casketbearers will be Gary Gardner, Larry Teply, Matt Gardner, Josh Kunze, Ross Gardner and Kevin Kvasnicka. Military rites will be provided by Ringgold Post #172 and the Iowa Honor Guard Unit. Burial will be in the Rose Hill Cemetery in Mount Ayr, Iowa.