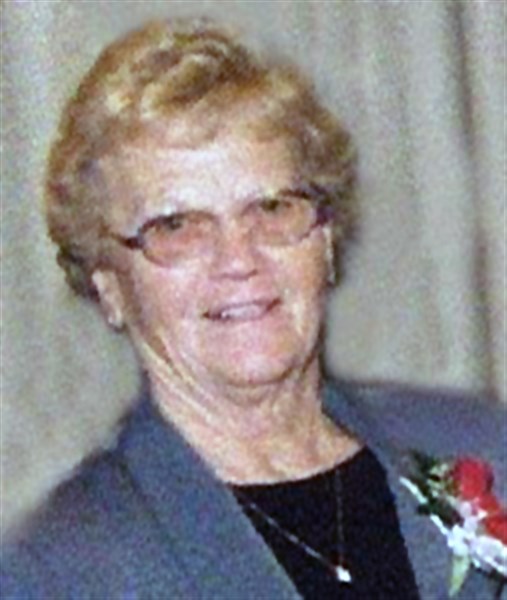 Joan Rosa (Woosley) Goodale was born on August 2, 1930 to William Emmett (Boxer) and Marie (Hoffman) Woosley. She was born in Lead, South Dakota as the family was on a return trip from the west coast. Jo was the fourth of five girls. She entered into eternal rest on October 1, 2015 at the age of 85.

Jo grew up on the Woosley farm south of Shannon City, graduating from Shannon City High School in 1948. During her high school years she was a popular girl and earned a reputation for her skills playing basketball. She loved working on the farm as the son that Boxer never had; and was greatly disappointed when she reached the age where Boxer told her it was not appropriate for her to be hanging out and carrying water to the farm hands.

As a teenager, Jo suffered life threatening injuries in an accident where she was riding on the front fender of a car when a tie rod broke and she went through a barbed wire fence. She was scarred for life where three strings of barbed wire nearly severed her body. By the grace of God she survived when her infection was cleared up by a new, experimental drug, penicillin.

On June 22, 1948, Jo married Billie Gene Goodale in a ceremony at her parent’s home. Following the marriage they lived in Diagonal, and Bill worked in his father’s produce business until March, 1949, when they moved to the country where they raised their four sons and lived the rest of their lives. They farmed and had a dairy operation with Jo working side by side with Bill, willing to do any of the physical labor needed. Affectionately referred to as “Mose” by Bill, she carried buckets of milk from the barn to the bulk tank until they installed a pipeline in 2008 and continued to help with the operation until the dairy cows were sold in 2012. She also bottle fed all of the calves.

Jo adored her family and loved having them gathered for her Sunday dinners and for the holidays. The annual family fishing trip to Minnesota was something she always looked forward to.

Bill and Jo supported the Diagonal community and were members of the United Methodist Church, being involved in Wesleyan Circle, Sunday school and other activities. They were especially popular with the youth they sponsored in MYF for several years, who enjoyed activities they hosted at their home. She continued to support the merged United Church of Diagonal, providing food for church dinners and whatever was asked of her.

She was preceded in death by her husband Bill this past April, 2015, her parents, sisters Jerry Scherer and Freda Tinker, and brothers-in-law Lester Akers and Leroy Tinker.

Services will be held at the United Church of Diagonal on Sunday, October 11, 2015 at 1:30 p.m., with Pastor Ed Shields officiating. Honorary casketbearers will be Shirley Ide, Dick Ide, Melba Akers and Kenny Scherer. Burial will be at the Knowlton Cemetery near Diagonal, IA. There will be a time for fellowship at the church following the service from 2-4 p.m.

Memorials have been established to the Knowlton Cemetery, United Church of Diagonal, and Diagonal Community School.