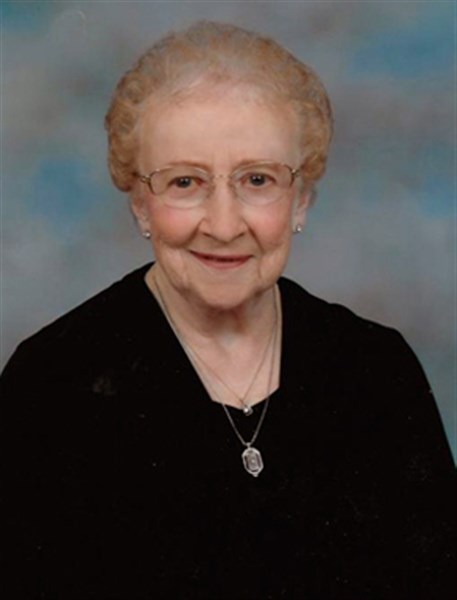 Rosalie Shay McFarland of 350 Dublin Drive, Iowa City, Iowa and formerly of Ottumwa, was taken to Heaven on the Wings of Angels on October 21, 2015 at the age of 93.  She was born August 9, 1922 in Maloy, Iowa to Joseph Leo (Lee) and Teresa Eason Shay. She married Joseph Nelson McFarland of Bouton, Iowa on May 28, 1949 at Immaculate Conception Church in Maloy, Iowa with the Reverend Maurice Culhane officiating.

Her early life was spent in Maloy where she graduated from Maloy High School in 1940.  She attended Marycrest College in Davenport, Iowa for two years focusing on a Dramatic Arts Degree then transferred to the University of Iowa where she graduated in April of 1946 with a Bachelor of Arts degree in Speech and Radio.  She was affiliated with Zeta Tau Alpha sorority and received her White Violet pin signifying 50 years of membership.

In September of 1946, she began a career in radio at KBIZ in Ottumwa, and then moved to KSO in Des Moines, Iowa.  After her marriage to Joe, they moved to Iowa City in order for him to complete his education, which had been interrupted by World War II.  Rosalie was employed by the University of Iowa in the College of Liberal Arts under Dr. Clay Harshbarger, Head of the Radio Department.  After her husband’s graduation, they moved to Sioux City, Iowa.  There Rosalie obtained credit hours from Briar Cliff College for a teaching certificate and began a teaching career in Elementary Education.  She taught Kindergarten at Webster and Emerson Elementary in Sioux City followed by 5 years at Lincoln School and 12 years at Eisenhower School, both in Ottumwa.  She retired in May 1985 after 22 years of teaching.  Rosalie lived at Melrose Meadows Retirement Community in Iowa City since Oct. 2010.

Rosalie enjoyed her grandchildren and great grandchildren, traveling, cruises, playing bridge and the Iowa Hawkeyes. She participated in many organizations, including Ottumwa Women’s Club, Ottumwa Lionel’s as a long time member and past president, Wapello County School personnel, the Iowa State Education Association, the National Education Association, Wapello County Republican Women Association, Ottumwa Regional Hospital Auxiliary and various others. She was a member of St. Mary of the Visitation Catholic Church in Ottumwa, St. Mary Family Service League, Ministry of Care and DCCW.  She was a member of the University of Iowa Presidents Club, a Life member of the University of Iowa Alumni Association and participated in SE Iowa “I Club.”   She was a member of St. Patrick’s Catholic Church in Iowa City since Oct. 2010.

Reece Funeral Home in Ottumwa was in charge of arrangements.