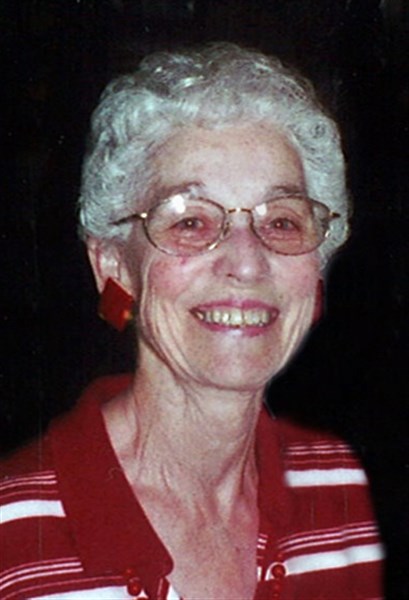 Naomi Ruth Robison was born June 18, 1933, to Forrest David Robison and Lily Adalene Trisler Robison, in Ellston, Iowa and departed this life on November 3, 2015, at the Ringgold County Hospital in Mount Ayr, Iowa.

Naomi became acquainted with the Lord at an early age and became a member of the Ellston United Methodist Church.

In 1953, they were blessed with a son Douglas Allan who was followed by Gary Dean in 1954, Randy Guy in 1962 and Lisa Grace in 1964. They resided on the family farm northwest of Ellston, Iowa, before retiring from the farm life in 2003 and purchasing a home in Tingley next door to the community building where both George and Naomi have volunteered for 12 years at the meal site. Naomi received the prestigious Shining Star Award for volunteerism from the Governor’s office in 2008.

Both George and Naomi were dedicated to their volunteer positions at the Tingley Meal site and also devoted members of the Tingley Kitchen Band and Charlie’s Revue.

Life on the farm found Naomi caring for her garden produce, gathering eggs, pasteurizing fresh milk and helping with the crop and livestock production when needed. She taught at least one daughter-in-law how to dress a chicken, freeze fresh corn, bake delicious goodies and love farm life.

Married 63 years, Naomi and George worked side by side on the farm, at the Tingley Meal Site, and on the dance floor across southern Iowa dancing the polka, two step, waltz, and square dancing. It was a joy to everyone to witness their love and devotion on the dance floor.

When Naomi’s children left the farm to begin their individual paths, she picked up a paint brush and painted water color landscapes in her upstairs studio during the warmer months. She shared her mini- masterpieces with her family and they are cherished family heirlooms.

Besides painting and dancing, gardening and canning, Naomi also had a love of reading and puzzles. There are few visits to their home when a puzzle won’t be strewn across a table with several gathering around to “place” a few pieces.

Her favorite “read” was mysteries but she basically read anything and everything. She loved science fiction books and movies – outer space, zombies, aliens, flying saucers, all intrigued her imagination and she loved living through her books.

They have been treated to numerous birthday and anniversary family celebrations but a highlight for them both was the celebration of 50 years of marriage in 2002. Over one hundred family and friend guests enjoyed supper, cake, laughs, and of course, dancing. The family again joined together joyfully in Feb. 2012 to celebrate 60 years of marriage and both George and Naomi’s birthdays.

Naomi and George have fond memories of a Western Caribbean Love Boat cruise with Kenny and Cleone Hosfield in February 1994 and several family and bus trips across the states and Canada.

Sadly, Naomi’s sister Dora May passed away in 2012 from Alzheimer’s disease, and all George’s brothers have passed away. Surviving Naomi are brothers and sisters-in-law David (Sharon) Robison of Des Moines, Iowa, and Eugene (Joyce) Robison of Cedar Rapids, Iowa. Also left behind are two sisters-in-law Cleone Hosfield of Mount Ayr and Vivian Hosfield Hawk of Branson, MO. Passing away before Naomi were brothers-in-law Lyle, Lloyd and Kenneth Hosfield, Dean Thomson and sisters-in-law Esther Robison, Shirley Hosfield, and Nadine Hosfield.

Services were held on Saturday, November 7, 2015 at 10 a.m. at the Ellston United Methodist Church in Ellston, IA with Rev. Bruce Giese officiating while Maurice and Marsha Jones and Sharon Thalman provided the music.

Burial is in the Ellston Cemetery at Ellston, IA with memorials established to the Ellston United Methodist Church, the Tingley meal site and HCI Hospice.