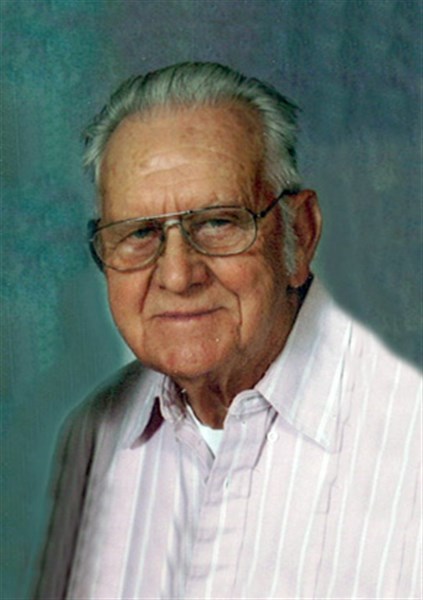 Ivan Clifford Groff, son of Harold Groff and Ruby (Hardisty) Groff, was born June 3, 1925 on the family farm in Taylor, County. Ivan departed this life on December 5, 2015 at the Mount Ayr Health Care Center due to suffering several strokes.

He grew up in the Corning, Carl, and Brooks area, attending country schools and Corning High School. Ivan was drafted at age 18, October 15, 1943, and placed in the United States Navy. He was on the actual invasion of Okinawa. He was honorably discharged January 21, 1946. Ivan was very proud to have served his country and of being a World War II veteran.

He returned home from military service to Creston, Iowa to his family living there. During this time, he married and was the father of four children, Sharon, Barbara, Elouise, and Douglas. This marriage later ended in divorce.

In June 1957, he purchased Bonebrake Locker and moved his family to Blockton, Iowa. He changed the name to Groff Locker Service and this was the start of his business he was so proud to own. Through the 31 years of operation, his customers became friends. He had worked for several three generation families and many years after retirement, he would meet a customer telling him they wished that he was still in operation.

On March 25, 1972, he married Sharon Lawrence with her young son, Brian. Ivan was raised by a good step-father, Tom Powell, so he knew the importance of being a good parent to Brian. Brian grew up learning and working beside Ivan, building a close bond as Dad and son.

Ivan and Sharon worked side by side at Groff Locker. After Ivan’s retirement in 1988, they were to enjoy 16 years of wintering in South Texas. He also enjoyed taking the grandchildren camping and going to the Henry Doorly Zoo as a vacation each year.

Ivan is survived by his wife of 43 years, sister Loletta (Kay) Welling of Mount Ayr, brother Leo (Bonnie) Powell of Creston, three daughters Sharon (Mike) Mason of Corpus Christi, TX, Barbara Groff of Fort Dodge, Elouise (Alan) Longfellow of Blockton, and son Douglas (Lynn) Groff of Omaha, NE. Twelve grandchildren, three whom were closer due to losing their father and spending many happy days at Grandpa and Grandma’s home over the years. He also had 18 great-grandchildren and numerous nieces, nephews, and cousins.

Ivan was a hardworking, community minded man. He enjoyed his family coming home and was always willing to help them. He will be missed for his kindness, his fountain of knowledge, and his love for his family.

The final resting place is at Rose Hill Cemetery at Blockton, Iowa. A memorial is in Ivan’s name to be decided later. Arrangements by Watson-Armstrong Funeral Home.