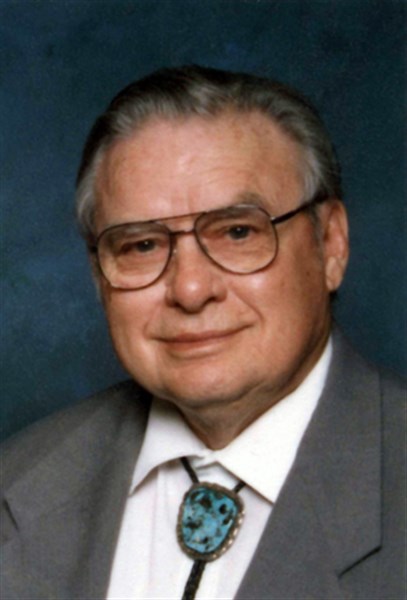 Loren Spencer Elliott, son of Mark and Ilah Malinda (Spencer) Elliott, was born March 16, 1923 on his parent’s farm in Rice Township, Ringgold County, Iowa. Loren was a twin to Lois.

Loren graduated from Mount Ayr High School in 1941. He worked for a short time at Mount Ayr Security State Bank. He was involved in Mount Ayr High 4-H and FFA farm projects. He attended Iowa State College on a Sears and Roebuck scholarship and monthly $20 loans from twin sister, Lois, along with her fine 1941 Christmas gift of a new Underwood Portable Typewriter.

Loren entered the US Navy on May 26, 1943 and was honorably discharged February 17, 1946 at Ft Snelling, St. Paul, MN. He served on bases at Farragut, Idaho, Michigan City, IN, Oklahoma A & M at Stillwater, Ward Island, Corpus Christi, TX, Naval Air Base, San Diego, Pearl Harbor, Hawaii, Norfolk, VA, Chicago, IL and one year aboard the U.S.S. Makassar Strait CVE-91.

Loren returned to Iowa State College and graduated in 1949 with a B.S. degree in Agricultural Engineering. He married Alma Anne Barna on April 2, 1948 in the Methodist Collegiate Church in Ames, IA. To this marriage, three sons were born: Mark Stephen Elliott, Robert Loren Elliott, and James Reese Elliott. Loren retired December 31, 1982 from the Soil Conservation Service, USDA, having served as assistant area engineer in Ft Dodge, planning engineer in the Little Sioux Watershed at Sioux City; area engineer in Topeka, KS; and Watershed and River Basin Engineer for the State of Iowa located in Des Moines. They lived in the Des Moines area from 1963 until they moved to Mesa, AZ in 1993.

Loren returned to Mount Ayr as a resident of Clearview Home and he passed away there on January 22, 2016. He was preceded in death by his parents; middle son Bob; and all of his siblings which include Zoe Evelyn Nichols, twin sister Lois Lorene Ives, and Jack Mark Elliott.

Services will be held at the Watson-Armstrong Funeral Home in Mount Ayr, IA at 2 p.m. on Thursday, January 28, 2016 with Rev. Roy Ives officiating.

There will be a flag presentation and taps provided by U.S. Navy Funeral Honors. There will a private burial at a later day in the Glendale Cemetery at Des Moines, Iowa.