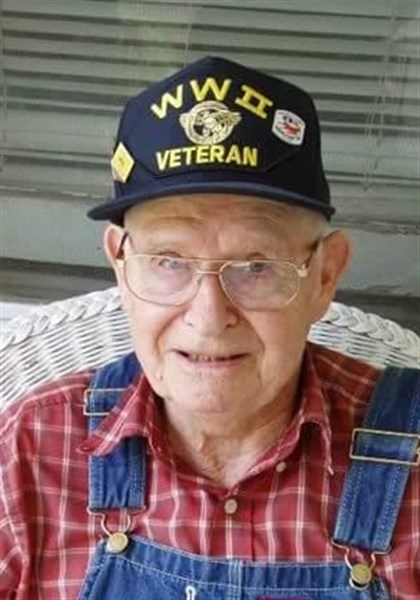 Amon Lee Hunt, son of George and Orilla Hunt, was born February 24, 1925 on the family farm in Worth County Missouri. He departed this life on January 29, 2016 at Clearview Home in Mount Ayr, Iowa.

On October 21, 1944 he married Lois Randolph. To this union five children were born: Kenneth, Keith, Margaret, Marjorie, and Rebecca (deceased).

Amon spent his life farming in southern Iowa and northern Missouri. He cherished the time he got to spend with his grandchildren taking them fishing at every opportunity. He enjoyed playing 42 dominoes and pitch whenever he could round up someone to play. He and Gene Motsinger had fun flipping quarters and trading knives. He always had a joke to tell and loved nothing more than sharing a laugh.

Amon was a World War II veteran having served as a scout in the Army’s 169th Infantry Regiment, spending time in New Guinea, the Philippines, and Japan. He was awarded a Bronze Star and a combat infantry badge. He was most particularly proud of his military service.

Memorials are to Homes For Our Troops. Their web page can be viewed at http://www.hfotusa.org/