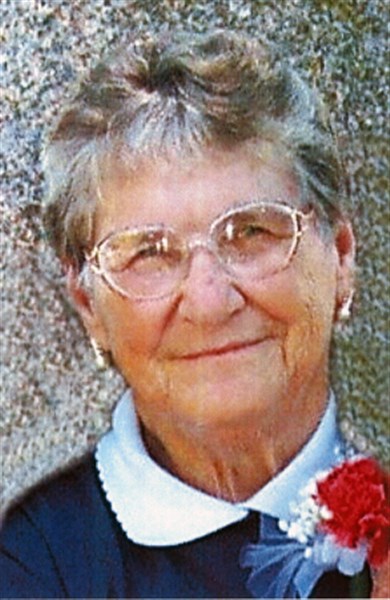 Betty Jane Robertson was born the 2nd of March, 1932, the third of seven children born to Jesse and Lucy Barnhart Roach, near Allendale, Missouri. She passed away peacefully at Clearview Nursing Home in Mount Ayr, Iowa, on the 22nd of February, 2016.
On June 27, 1949, she was united in marriage to her childhood sweetheart, James Walker (J.W.) Robertson in Grant City, Missouri before a Justice of the Peace, and celebrated 65 years of marriage before J.W.’s death in 2014. To this union, five children were born, Billy Lee, Mary Jane, Wanda Sue, Kenneth Eugene, and James Michael. Their home was always open to the children in the community, and many of these children considered them their adoptive parents.
In the early years of her marriage, Betty stayed home raising her five children. She shared her cooking skills first in her own business when she owned and operated the Redding Café on the town square for two years in the 1960s. After closing the café, she went to work as a seamstress for many years at the Grant City Cap Factory in Grant City, Missouri and then at O’Bryan Brothers in Bedford, Iowa. When O’Bryan Brothers closed, she kept busy at home as a seamstress and day care provider, but most importantly, as wife and mom.
Betty was a loving wife, mother, grandmother, sister, and friend. She liked to keep busy and had many hobbies that included cooking, sewing, quilting, crafting with J.W., among other things. She especially enjoyed gardening with J.W., and she loved sharing her canned goods and homemade goodies with family, friends and neighbors. What she loved most was spending time with J.W., and seldom was one seen without the other and without a smile on their faces. They truly enjoyed each other’s company. Betty and J.W. enjoyed many years of traveling with their children and their children’s families to various parts of the country and spent 15 years as winter Texans with many other Ringgold County friends.
Her grandchildren and great grandchildren were especially dear to her, and they loved spending time with their grandma. Her home was always home to all the children in the community and to her many nieces and nephews, and she will always be remembered as everyone’s mom and everyone’s friend.
She was preceded in death by her parents; sister, Edna (Roach) Baker; and brothers, Ernest Roach and Loyd Roach.
Survivors include her children, Billy Lee Robertson (Karen) of Nixa Missouri, Mary Jane Jones (Ron) of Clever, Missouri, Wanda Sue Hosfield (Doug) of Mount Ayr, Iowa, Kenneth Eugene Robertson (Debra) of Mount Ayr, Iowa, and James Michael Robertson (Mary Beth) of Omaha, Nebraska; grandchildren, Jesse Robertson (Melissa), Julie Tommingo (Ross), Eric Jones (Erica), Brandon Jones (Kalyne Lynch), David Hosfield, Cass Hosfield (Annie), Jeff Robertson, Justin Robertson (Kim), Nichole Jensen (Bryan), Brianne Curtis (Chaz), Stephanie Robertson (Hector Martinez); 14 great grandchildren; sister, Marie Campbell (Everett); brothers, Darrell Roach (Kathy) and Harvey Roach (Eldeen). She is also survived by numerous nieces and nephews and other relatives and friends.
Memorial contributions are being accepted for a gift to the Redding community in her memory.
Services were held at the Watson-Armstrong Funeral Home in Mount Ayr, Iowa on Thursday, February 25, 2016 at 2 p.m. with Rev. Skip Rushing officiating and Nancy Sackett and Tina Bounds providing the music.
Active casketbearers were Bill Robertson, Ken Robertson, Mike Robertson, Jeff Robertson, Ron Jones and Doug Hosfield. Honorary casketbearers were Jesse Robertson, Eric Jones, Brandon Jones, David Hosfield, Cass Hosfield, Brianne Curtis, Justin Robertson, Nichole Jensen, Julie Tommingo and Stephanie Robertson.
Burial is in the Redding Cemetery at Redding, Iowa.