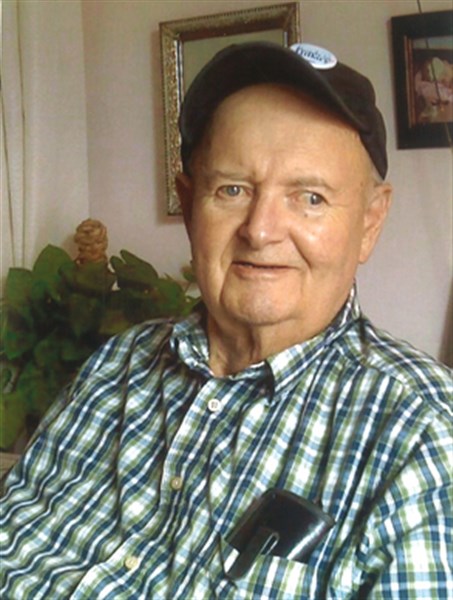 Jackie Joy Padgitt, known to many as Jack, was born February 27, 1937, in Bartlett, Iowa, to Burbin and Viola (Asman) Padgitt. He departed this earthly life on April 1, 2016, at 79 years of age, in Mercy Medical Center in Des Moines, Iowa.
In 1941 the family moved to a farm southeast of Kellerton. He grew up milking Jersey cows and learning the love of farming alongside his family. Jack attended Cornstalk College, a one-room schoolhouse, through the ninth grade. During high school, Jack played the tenor saxophone and spent a summer working with his aunt, helping out after his uncle’s heart attack. He graduated from Kellerton High School in 1955. After high school, Jack studied chemistry and played football at Graceland College.
On June 13, 1956, Jack married Helen Mae Banks after eloping to Las Vegas, Nevada. The newlywed couple moved to Compton, California where Jack worked for a milk delivery company. They lived happily in California for a total of six years, and were blessed with their first two children: a son, Christopher Jackie, born August 29, 1959, and a daughter, Athena Anne, born October 26, 1960. Although Jack and Helen enjoyed the California climate, Jack missed the farm and his family, so Jack moved his family back to the Kellerton area in 1962. On September 17, 1963, Jack and Helen’s third child, a daughter, Naomi Hazel was born. In 1965 they settled into their home southeast of Kellerton, previously owned by Jack’s grandparents, John and Mary Olive Padgitt.
Jack joined his father in the family dairy of registered Jerseys, was an elected member of the American Jersey Cattle Club, and was also an honorary member of the Grand Valley FFA. He continued with the dairy business, building his herd of registered Jerseys and farming row crops and alfalfa hay. In the late 70s, Jack was forced to liquidate the herd and return to school, where he earned an associate’s degree from DMACC. He was employed by Tom Harkin, Farm Credit, and Grand Valley Schools, while also working independently as a tax preparer. Further, he was  an active member of the Kellerton Christian Church and served as Sunday School Superintendent. Any time of year you would find Jack engaged in the most typical farm duties, such as milking 60 plus Jersey cows, feeding hay and corn silage, welding and repairing farm equipment, planting corn or mowing hay. He could always be found choring or working on another project that needed done. Jack was great with math, and liked designing and making the things the farm needed himself. Jack was also a very talented woodworker, who made hope chests and sewing boxes as gifts for his family. To this day, Jack’s own life size cross glows in the baptistry of Grassland Heights Baptist Church in Franklin, TN. His artistry didn’t stop there as he was also a photographer and played an active role supporting his family’s musical talents.
Let it be remembered that Jack was a very caring and kind person; he could always be counted on to help, care for, or listen to his family and neighbors. His devotion and caregiving to his wife Helen, was unending, as was his care for his mother in her later years. Above all however, Jack’s children and grandchildren were his pride and joy. He always made time to love the people close to him. Also remembered is his great one word sentence: “Well.” He changed his tone, inflection, and facial expressions to let you know what “well” meant. He knew you say a lot with what you don’t say, and that you show you are listening and have heard what was said. You provide a reaction without taking too much of the attention away from the speaker, and Jack was not an attention-seeker. He was a supporter and a caregiver. And even through the many hardships life dealt him, Jack always kept a positive outlook and a grateful attitude towards life. Joy was his middle name.
Left to celebrate his life are his three children, son Chris Padgitt and wife Teresa, daughter Athena Simpson and husband Randy, and daughter Naomi Dolecheck and husband Allan. His brothers, Dennis Padgitt and wife Janice, Steve Padgitt and wife Janet, and Merritt Padgitt and wife Chloe. His grandchildren, Tiffany Padgitt McDonald and husband Marty, Jamy Padgitt, Adam Simpson and wife Lauren, Jacob Simpson, Isaac Simpson, Sheryl Dolecheck Downing and husband Matt, and Erin Dolecheck. Jack also had eight great-grandchildren, Kaley and Brynna McDonald, Jalyn and Jody Hawkins, Ridge Simpson, and Mikaela, Chasse, and Chloe Downing. In addition, Jack had numerous nieces and nephews, cousins, and friends.
Jack was preceded in death by his parents and wife.
Services will be held at the Watson-Armstrong Funeral Home in Mount Ayr, Iowa on Friday, April 8, 2016 at 10 a.m. with Rev. Terry Roberts officiating while Sandy Campbell, Richard and Camille Jackson and Erin Dolecheck provide the music.
Casketbearers will be Chris Padgitt, Randy Simpson, Allan Dolecheck, Jacob Simipson, Isaac Simpson, Matt Downing, Adam Simpson and Marty McDonald. Burial will be in the Maple Row Cemetery at Kellerton, Iowa. A memorial fund has been established for the United Methodist Church in Kellerton, Iowa.