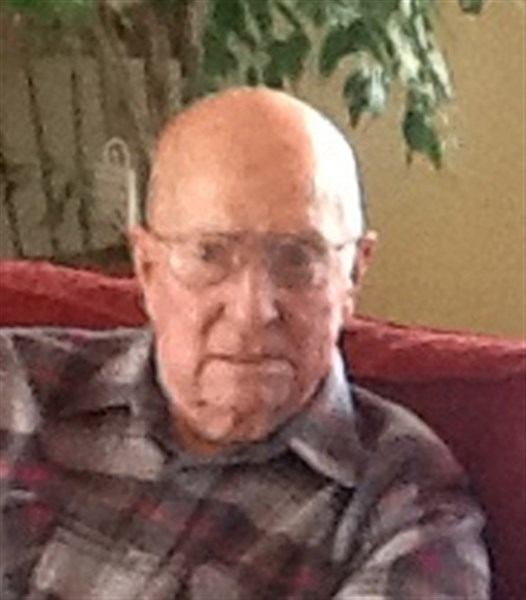 Joseph “Joe” Willard Snethen, son of Albert Hosea and Grace Eugene (Dant) Snethen, was born July 13, 1922 in Ringgold County, Iowa and departed this life on March 27, 2016.
Joe will be remembered for his contagious grin, straight-talking demeanor, walking all over town well into his final years, and having the ability to connect and earn  trust from all those he encountered.
Upon graduating from the eighth grade, Joe set off to assist his family through farm work before enlisting in the United States Army on March 4, 1943. He took to automotive mechanics while stationed at Fort Benning in Georgia. He served with the Regimental Headquarters Co., 533rd Engineer Boat and Shore Regiment. He was stationed in New Guinea, the Philippines, and Japan. Always proud of serving in WWII, Joe joined the Veterans of Foreign Wars in Mount Ayr where he served as Commander when the VFW building was erected  in the 1950s. His family spent many evenings overlooking the construction of the building while Joe and others worked.
After discharge on  January 9, 1946 Joe returned to Mount Ayr and on November 11, 1946 married Betty Bonnelle Hammond. Betty and Joe had three children: Janet Lynn, Cynthia Rae, and Jeffrey Joseph. Joe worked a number of years for the Iowa State Highway Commission and as a mechanic for Andy Johnson Chevrolet, while also serving as a volunteer of the Mount Ayr Fire Department. In 1965, the family moved to Indianola where Joe worked for McCoy Manufacturing for five years before taking a job with Georgia Pacific in Des Moines, where he would also obtain his GED. Transferring to the Madison, Wisconsin office in 1973, Joe became their warehouse supervisor, and in 1984 Joe retired and returned to Mount Ayr with Betty. Determined to keep busy, Joe mowed and maintained yards throughout the community, worked at Heritage Park, and drove for the Southern Iowa Trolley. Joe was also member of the United Baptist-Presbyterian Church and the American Legion.
Joe was a determined man who liked to stay busy. He walked five miles a day for a number of years and was still trying to walk at least a mile a day when he was 93 years of age, stopping and visiting with others along the way. He was an avid reader and even though macular degeneration robbed him of much of his sight, he was still able to read books with the help of a Magna-Site machine. He loved westerns and mysteries.
Joe is survived by his wife of 69 years, Betty; daughters Janet (Lyle) Hogue and Cyndi (Gail) Mapes; son Jeff Snethen; sister Roena (Calvin) Adams, sister-in-law Sue Snethen and brother-in-law Allen Coffman; six grandchildren – Kevin Hogue and Tyanne Carey, Shonn and Chadd Mapes, and Justin and Bobbi Jo Snethen; and great grandchildren – Brady and Jacey Carey, Jude Hogue, Andrew Snethen and Grayson Mapes. In addition he is survived by many nieces and nephews along with a host of friends.
He was preceded in death by his parents; sisters Mildred Vosler, Mary Gunter, Kathleen Pollock, Vera Liermann, Vesta Gibson, Ona Snethen; brother Rex Snethen; father-in-law Roy Hammond and mother-in-law Lois Hammond Creveling.
There is open viewing at Watson-Armstrong Funeral Home in Mount Ayr on Thursday, March 31 from 12:00 p.m. to 8:00 p.m. with the family present on Friday from 10:00 a.m. to 11:00 a.m. Services will begin at 11:00 a.m. Friday, April 1 with Pastor Mike Maddy officiating. Music is provided by Debbie Cannon and Terry Roberts with special songs “One Day At A Time” and “Precious Memories.” Casketbearers are Kevin Hogue, Shonn Mapes, Chadd Mapes, Justin Snethen, Brady Carey, and Bob Carey. Honorary Pallbearers are Tyanne Carey, Bobbi Jo Snethen, Steve Adams, Rick Adams, Hugh Terwilliger, and Donald “Jake” Dailey.
Burial is in Rose Hill Cemetery with military rites by Ringgold Post #172 and the Iowa Honor Guard Unit. Memorials established in his name to the United Baptist-Presbyterian Church, American Legion Post #172 or HCI Care Services in Mount Ayr.