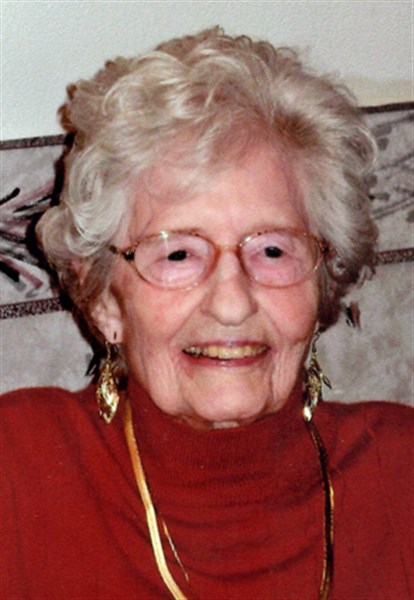 Louise Nina Lea Moore Corll, daughter of Henry and Hazel (Wendall) Moore, was born on May 16, 1923, on a farm in Kellerton, Iowa. She enjoyed growing up on the farm with her older brother, Hallie, and her younger sister, Wathena. She attended grade school at Mountain Brush, which is located at Leasonville. While attending high school in Mount Ayr, she stayed in a boarding house during the week and went home to the farm on weekends.
In 1940, in Grant City, Missouri, Louise was united in marriage to Donald “Doc” Earnest Corll. Doc and Louise raised three daughters on their farm in Ringgold County. She found happiness in all that was involved in being a farm wife and mother. She always found time to participate in rural carrier meetings with Doc, and to be of service in many United Methodist Church organizations and functions. For five years she was a dedicated 4-H leader for the Sunflower Girls. Being a member of a bowling league in Mount Ayr for several years was a pleasurable diversion from work on the farm.
Mrs. Corll was an accomplished seamstress who loved sewing for her three young daughters and for their family home. Also, throughout her life, Louise became self-taught in other areas: expanded sewing crafts, macramé, duck decoy painting, and other painting crafts. She also became an avid reader.
After Doc’s death, Louise stayed on the family farm for a few years and then moved to Ankeny, Iowa to be closer to her family. The United Methodist Church continued to be an important part of her life. She also delighted in participating in numerous activities with other residents of Maplewood Village where she lived. During these years, she had the opportunity to do a great deal of traveling throughout parts of the United States and Europe with her family and friends.
Louise passed away peacefully at Mercy Hospice – Johnston, Iowa on March 16, 2016. In addition to her husband, Louise was preceded in death by her parents; her brother and sister-in-law, Hallie and Elma Moore; her sister and brother-in-law, Wathena and Lyle Newman; and two sons-in-law, Bill Condon and Don Pine.
Louise is survived by and will be missed greatly by her daughters and son-in-law: Mary Ellen Corll of Des Moines, Iowa, Linda Pine of Aiken, South Carolina, Dianna (Ron) Anderson of Osceola, Iowa; her granddaughter, Heather (Myles) Reedy of Greenville, North Carolina; great-granddaughter, Adelaide Reedy; and many cousins, nieces, and nephews.
As requested by Mrs. Corll, there will be no visitation or funeral. There was a brief memorial service at her burial on March 22, 2016, at Maple Row Cemetery in Kellerton, Iowa.
Memorial contributions may be made to the United Methodist Women at United Methodist Church, Mount Ayr, IA 50854.
Mrs. Corll’s family is deeply grateful for the devoted care she received at Mercy Hospice.
Online condolences may be expressed at www.HamiltonsFuneralHome.com.