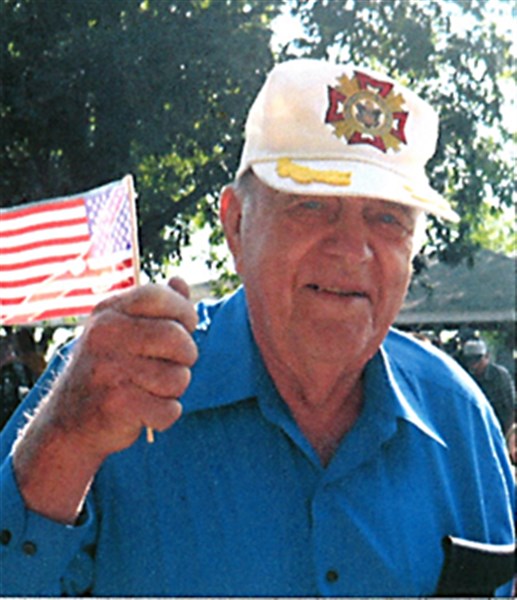 John Delbert Jackson, second son of Clifford and Sarah Ethel Hunt Jackson, was born at Jackson Corner in Ringgold County, Iowa on October 21, 1925. He died in Clearview Home, Mount Ayr, Iowa on June 26, 2016 after a struggle with cancer.
Delbert attended grade school at Rose Hill and graduated from Mount Ayr High School in 1944.  He volunteered to enter the U.S. Army and was attached to the 3rd Army, 94th Infantry Division, Company A, arriving in Europe in time to participate in the Battle of the Bulge and the liberation of Europe. Delbert was wounded while serving in Germany and among other citations he received the Purple Heart and Bronze Star for his courage, determination and devotion to duty.
When he returned to the U.S. he married Hazel Ruckman December 15, 1949. Until Delbert’s declining health necessitated their move to town, he and Hazel spent their lives on their farm north of Allendale, Missouri and lived in the house built by his great grandfather, James Jackson. They raised their four children in this home:  William Delbert, Susan Lynn, Michael Alan, and John Jay.
Delbert was preceded in death by his parents; son, Bill; sisters Evelyn James, Opal Barnett, Dorothy Jensen, and Mary Faith who died in infancy; and his brothers James Jackson and Joe Jackson.
In addition to his wife and children Delbert is survived by son-in-law Manny Trujillo; daughter-in-law Debbie Jackson; eight grandchildren: Levi and Dari Trujillo, Brooke, Karin and Drew Jackson, and Amy, Adam, and Alex (Valentina) Jackson; and his sister Sally (Chuck) Sedgewick.
In addition to his family and farming activities, Delbert was very active in community projects including Allendale Community Betterment activities. He was a regular volunteer in the Allendale 4th of July activities and the Allendale Rodeo. Delbert organized the construction of the Veteran’s Memorial on the court house lawn in Grant City, Missouri. He was a member of the Grant City Lions Club and the Grant City VFW #3123. He was a Hospice volunteer and delivered Meals on Wheels. Over his lifetime he donated gallons of blood in local blood drives. Delbert was always on the go. He enjoyed being with friends, family gatherings, auctions and traveling. He never met a stranger. Delbert was an avid reader, loved playing dominoes, especially the game 42, croquet and cards. He will be greatly missed by all.
Visitation will be Friday, July 1 from 6 to 8 p.m. and funeral services will be held on July 2, 2016 at 10:00 a.m.  all at the Watson-Armstrong Funeral Home in Mount Ayr, Iowa. Burial will be at Hickory Grove Cemetery. Memorials are to the Allendale Community Betterment and HCI Care Services in Mount Ayr.