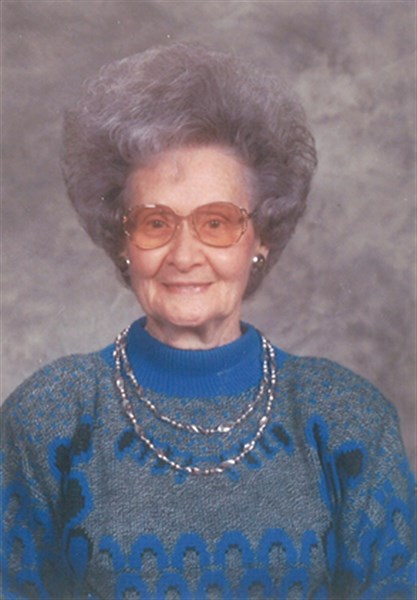 Wanda Lee (Jeter) McGahuey was born April 24, 1926 near Hatfield, MO to Cordia Jones Jeter and Fred Elmer Jeter. She passed away Wednesday, June 29, 2016 at the Mount Ayr Healthcare Center.
She spent her life in and around Hatfield, MO and Ringgold County, attending local country schools, Mount Ayr High School and graduating from Maloy High School in 1944. She was employed at the Mount Ayr Cleaners until she met her husband. On December 22, 1946 she married Vernon McGahuey at the Little Brown Church in the Vail at Nashua, IA. To this union were born a daughter, Connie and a son, Terry.
In 1951 Wanda and Vernon began farming, working side by side in this endeavor as well as in Vernon’s bulldozer business. They enjoyed 44 years together until Vernon’s death in 1993. Wanda then sold their farm and dozer business; moved into Mount Ayr and built the home she and Vernon had planned for their retirement. She became involved in the community; enjoying the many volunteer opportunities afforded her. She was a member of the American Legion Auxiliary, Ringgold County Hospital Auxiliary, and served on the election board. Wanda especially enjoyed helping with the Red Cross Blood Bank and was a 30 plus year volunteer in that endeavor. She also helped to serve countless dinners with the Legion Auxiliary and was honored as the volunteer of the year in 2011. It was through helping with these dinners that she became known as one of the “drinking ladies” – a title she proudly wore for serving water, coffee and tea. She enjoyed going to weekly meal site dinners and contributed her part there as well by teaching the cooks how to make gravy without lumps. She also became widely known for her vanilla, chocolate and butterscotch almond bark, crunchy peanut butter, and cracker cookies – all made, swirled on top and carved by hand. Wanda and Vernon developed a love of dancing and she continued going to local “jams” after Vernon’s passing. She loved to waltz. Wanda was very caring and loving, always there for her family and many friends. Whatever needed doing, she was willing to give it a try, and so grateful to be able to do so. She was very proud of her home and yard, keeping both in immaculate order and often enduring great kidding from her family that there might be one blade of grass ½ inch longer than the rest. She herself was a great “kidder” and often used her sense of humor and quick wit. Her most precious possessions were her children, grandchildren and great-grandchildren and she dearly loved having her family around her. Nothing made her happier than fixing homemade noodles with all the trimmings and then watching them disappear. If you weren’t full when you left Wanda’s she made sure you took some home with you! Her grandchildren often called her for advice – especially on how to make sausage gravy or noodles.
Wanda was preceded in death by her parents; husband, Vernon; daughter-in-law, Diane; six brothers: Eldon, Ardith, Paul, Clyde, Jim and Ray; sister, Virginia Sharp; six sisters-in-law; seven brothers-in-law; one nephew and two nieces. Left to cherish her memory are her daughter, Connie (Rick) Stoltzfus of Arnolds Park; son, Terry (Nancy Frerichs) McGahuey of Marshalltown; four grandchildren: Jason (Mindy) McGahuey of Muscatine, Jennifer (Jeff) Eggleston of Belle Plain, Troy (LaRae) McGahuey of Marshalltown and Andrea (Brian Lippold) of Des Moines; ten great-grandchildren: Xander, Zachary, Zara, Zoe and Zina Stoltzfus, Mason and Maren Eggleston, Raelene and Raechel McGahuey and Aleigha Harryman. Also surviving are sister Faye Sickels of Mount Ayr; sisters-in-law, Helen Jeter, Elladeen McGahuey and Helen McGahuey as well as ten nieces, ten nephews and many, many friends. Watson-Armstrong Funeral Home in Mount Ayr is in charge of the arrangements.
Services were held Saturday, July 2, 2016 at 1:30 p.m. at the United Methodist Church in Mount Ayr Iowa with Rev. Skip Rushing officiating.
Casketbearers were Ron Sickels Jim Jeter, Jason Stoltzfus, Roger McGahuey, Troy McGahuey and Landry McGahuey. Burial is at Rose Hill Cemetery at Mount Ayr, Iowa.
Memorials have been designated to the Mount Ayr American Legion and HCI Hospice of Mount Ayr, Iowa.