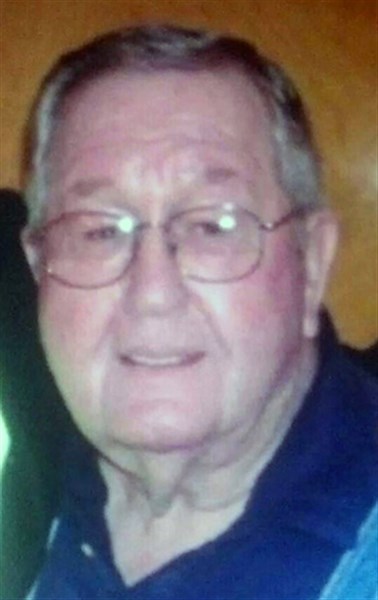 Max Herrington, 85, of Atlantic, passed away Sunday, July 24, 2016, at Atlantic Specialty Care.
The son of Marion and Ruth (Jacobs) Herrington, Max Eldon was born November 25, 1930, in Mount Ayr, Iowa. On December 31, 1948, he was united in marriage to Helen Ruth Turnball. The couple lived in Benton, Iowa, where he operated a filling station, Benton Service.  In June of 1962, they moved to Atlantic, and Max was the manager at Warin Oil Company, south of Atlantic on Highway 6. In years to follow, he managed the Warin Truckstop at The Valley when the Interstate first came through Cass County in 1967 and later,  Hoegh Tire and Oil. Max retired in 1995, as First Whitney Bank’s custodian after 13 years.
Max took every opportunity, often with family at his side, to throw his line in the water.  He especially loved catfishing on the Nishnabotna; one trip ending with a 10 pound catch. He loved to feed the birds and squirrels every day and had Steve take over when he was no longer able to himself. Max was one of those guys that would do anything for others and not expect a single thing in return. He and Helen often sent care packages home with family filled with household necessities. The couple treasured time with family.  When thinking back to the grandkids’ childhood visits to their home it was often said, “when weren’t they there?”
Max is survived by his sons, Steve (Deni) Herrington of Atlantic and Randy (Jennifer) Herrington of Clarinda; grandchildren, Jake (Rachel) Herrington of Council Bluffs, Ross Herrington of West Des Moines, Alex Herrington of Seattle, WA, Jason (Linda) Herrington of Chicago, IL, Zach Herrington of Clarinda, Ben (Jana) Herrington of Glenwood and Luke Herrington of Clarinda; great-grandchildren, Jack, Evan and Hatch Herrington of Chicago, IL, Emily and Max Herrington of Clarinda, Alyssa Herrington of St. Louis, MO and Cole Herrington of Glenwood; step-grandchildren, Jason (Dena) Phillips of Clarinda, Brianna (Bill) Phillips of Elsmere, KY and Caitlyn (Jared) Phillips of Kansas City, MO, step-great grandchildren, Jarek Landsness of Glenwood and Ava and Charley Phillips of Clarinda; sister, Mary Ann Matthews of Baytown, TX; sisters-in-law, Evelyn Hilton of Calumet, IL and Theresa Herrington of Des Moines; and many nieces and nephews.
He was preceded in death by his wife, Helen; parents, Marion and Ruth Herrington; brothers, Jim (Jean) Herrington and Dave Herrington; sister-in-law, Darlene (Elmer) Vanderpluym, and brothers-in-law, Robert Hilton, Wayne, Robert and Darrell Turnbull.
The family greeted friends and relatives on Wednesday, July 27, from 10:00 a.m. to 11:00 a.m. at Roland Funeral Home.
Graveside services followed the visitation at 11:00 a.m. at the Atlantic Cemetery, with Reverend Nancy Jensen of the United Church of Christ officiating.
The family has suggested that memorials be made to the United Church of Christ or the American Diabetes Association.
Roland Funeral Home is caring for Max’s family and his arrangements.  Condolences may be left at www.rolandfuneralservice.com.