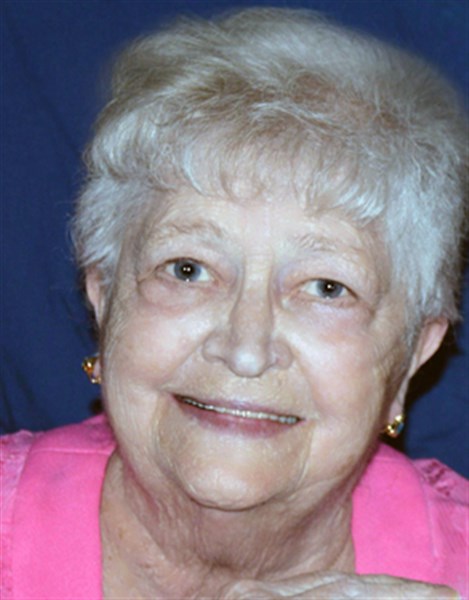 Eva Lucielle Hammons Comer was born in a farmhouse southwest of Tabor, Iowa to James Franklin and Alta (Brammer) Hammons. Born to this union were 11 children and Lucy being number 9.
She grew up in the country and attended country school through the 8th grade. She didn’t get to go to high school until the next year when her family moved closer to town. She was active in sports and loved softball and was the captain of her high school track and basketball team.
Lucy met her husband, Eugene Alan Comer, when he brought his sister, Irene, over to meet her brother, Bill. Lucy was 12 years old at the time and the first time they met, they argued. As the years passed, she saw him several times and they started dating in 1949 and later married on June 10, 1950 and Lucy stated, “We’ve been arguing ever since!”
To this union, seven children were born; Steve, Teresa, Stan, Sydney, Sandy, Scott, and Sheldon. Gene and Lucy farmed their entire lives. You would find Lucy working on the farm whenever Gene needed her or delivering meals to the men in the field. She enjoyed fishing, playing pool, and playing pitch. Lucy cooked at many restaurants and bars throughout her adult life. She was an excellent cook and always had a “crowd of followers” wherever she was cooking. Lucy didn’t know a stranger and would sit down and talk for hours. She enjoyed her grandchildren and great grandchildren and loved watching them play sports when she could. She taught several of her children and grandchildren how to cook, sew, fish, word working skills, and how to can fruit and vegetables. Lucy was a wonderful teacher to her grandchildren, and they were always eager to go to Grandma’s house where they would always find cookies or cake.
Lucy accepted the Lord as her Savior and was baptized in the Christian way in 2013.
Lucy passed away at Clearview Home on August 29, 2016 surrounded by her family at the age of 83 years.
Left to cherish her memory are her husband, Eugene; children Steven (Mila) Comer of Lorimor, Teresa Comer of Ankeny, Stan Comer of Osceola, Sydney (Kathy) Comer of Diagonal, Sandy (Wylie) Beal of Bennett, CO, the late Scott Comer of Mount Ayr, and Sheldon (Brenda) Comer of Tingley; grandchildren Steve Comer of Osceola, Kelly Comer of Peru, IA, Chris Comer of Lorimor, IA, John (Amy) Hughes of Ankeny, IA, Amy (Sean) O’Neill of Minneapolis, MN, Travis (Stevie) Hotaling of Des Moines, IA, Aaron (Beth) Comer of Mount Ayr, IA, Lindsay (Tyson) Allen of Altoona, IA, Tyson (Jodi) Comer of Diagonal, IA, Bobbie Comer of Freemont, IA, Jessica Sly (Godchild), Audrey (Josh) Dunbar of Aurora, CO, Alicia (Jarrett) McGee of Bloomfield, CO, Tanya Comer of Winterset, IA, William Comer, Terri Comer, Sara Comer of Independence, MO, Shelby Comer of Diagonal, IA, and Shane Comer of Tingley, IA; 17 grandchildren and 1 great great grandchild; a sister Peggy Bammer of Creston, IA; sister-in-law Beulah Brammer of Murray; a host of nieces and nephews, and friends.
She was preceded in death by her parents and step-father; son Scott; great granddaughter Avery; nine siblings; mother and father-in-law; brothers and sisters-in-law. Armstrong Funeral Home in Mount Ayr is in charge of the arrangements.
Services were held on Wednesday, August 31, 2016 at 4 p.m. at the Benton Cemetery at Benton, Iowa with Pastor Bill Armstrong officiating. The eulogy was by Ronche Still and casketbearers were Steve Comer, Stanley Comer, Sydney Comer, Sheldon Comer, Ronche Still and Doug Still. Honorary pallbearers were Scott Comer, Deric Drake, Crae Geist, Doug Poore, Danny Karr and Lyle Faris.
The final resting place is at the Benton Cemetery at Benton, Iowa. A memorial fund has been established in her name.