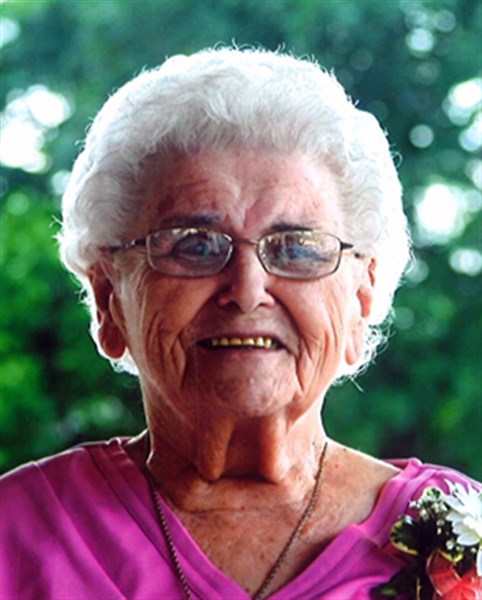 Vera Florence (Austin) Moore, oldest daughter of John Elmer and Lula Alice (Akins) Austin, was born, August 18, 1922, at home in Lorimor, Iowa. Vera attended the Baptist Church in Lorimor and was baptized there as a young girl. Vera attended and graduated as Salutatorian of her class from Lorimor High School in 1939. Unable to afford to attend college, she moved to Mount Ayr in late May, 1939.
Vera initially worked for Laughlin’s doing abstracts and other secretarial duties. Later she worked in restaurants.
She lived in a rooming house with five other girls. That summer she met the love of her life, Jack Edgar Moore. They were married December 7, 1941 at Bethany, Missouri. Jack and Vera had a very special relationship and marriage that lasted 69½ years before his death.
Vera’s greatest enjoyment was being a wife and mother. She was dedicated to her family and worked very hard through the years to care for all of them. She was especially devoted to caring for her handicapped daughter, Beverly, at home for over 37 years. Her love, compassion, faith, kindness and strength gave all of her children and many others a feeling of deep trust and security.
As her children grew up and left home, Vera became active in her local TOPS Club and was very involved for over 20 years. She and Jack took several bus trips to the conventions and made many friends she still has pen pals. She loved letter writing and sending cards. She also enjoyed baking and won many ribbons at the County and State Fair. She taught “Country School” every week at both local nursing homes for over 10 years, and thoroughly enjoyed her time with the residents. Jack and Vera loved to dance and could be seen at the local dances before they got busy with their family and then in the years after their children were grown. Vera took loving care of Jack for seven years after his stroke and has missed him every day since his death five years ago. Vera passed away August 21, 2016 after having a celebration of her 94th birthday with family and friends three days earlier.
Survivors include her children Cheryl (Dave) Stuck of Warrensburg, MO, Jeannette (Dan)  Lutrick of Mount Ayr, Susan (Gary) Fisher of Indianola, IA, and Jay (Kim) Moore of Broomfield, CO; 14 grandchildren; 26 great grandchildren; 5 great great grandchildren; brother Charles (Janell) Austin of Des Moines, IA; sister Virginia Penfold of Osceola, IA; numerous nieces, nephews and friends.
Vera was preceded in death by her parents; four half brothers John Austin, Alfred, Ed, and Elmer Bodtke; two half sisters Emma Austin and Viola Anneberg; two brothers, Clarence and Clair Dean Austin; two sisters, Vernetta Dove and Jean Hunter; son, Charles Moore; twin daughters, Barbara and Beverly Moore; grandson, Caleb Moore; and grandson-in-law, Tadd Bainum.
Services were held Sunday, August 28, 2016 at 2 p.m. at the Armstrong Funeral Home in Mount Ayr, Iowa with Rev. Seth Denney and Rev. Charles Austin officiating. Providing the music was Mallory Tollefson, John and Deb Larsen, Mary Davenport, Margaret Bickers and Andy Trullinger, Kristy Gilliland and Vera Stalcup.
Casket bearers were Cecil Moore, Steve Stuck, Blake Karas, Jack Moore, Jeff Lutrick, Austin Moore, Jim Stuck, Chuck Karas and Alex Moore. Honorary casket bearers were Heidi Lutrick, Korbi Munoz, Gentry Burton, April Taylor and Hannah Moore.
The final resting place is Rose Hill Cemetery at Mount Ayr, Iowa. Memorial funds have been established to the Regular Baptist Church or Lorimor Alumni Banquet.