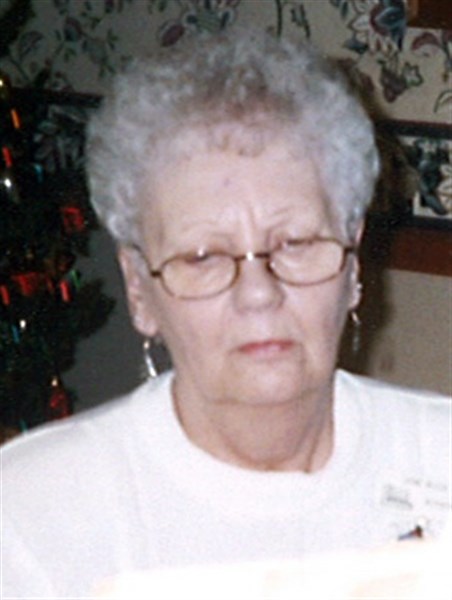 Isabelle Jane (Wheelen) Buck was born November 28, 1938 and passed away October 30, 2016 at Clearview Home in Mount Ayr due to complications of Alzheimer’s disease.
Jane was born on their farmstead north of Mount Ayr to Emeral and Florence (Herbert) Wheelen. Florence passed away eight days following Jane’s birth, so she was raised by her father, grandmother, Grace Wheelen, Uncle Earl and Maxine Wheelen.
Graduating from Mount Ayr High School in 1957, Jane married Charles Braby. They lived on her family farm in Maloy where they raised six children, and she was active with farm operations. They later divorced.
Jane married Roland Buck on December 31, 1988. They took up residence in Mount Ayr, where she was involved in church, played the piano, and was active in the community.
Izzy, as only her son, Curt could get away with calling her, had a great sense of humor and passed that along to her six children. You had to have a great sense of humor to raise six kids!
After being diagnosed with Alzheimer’s, Roland kept Jane at home, and cared for her, as long as he could before placing her in Clearview Home on July 7, 2014.
Survivors include her husband Roland Buck; children Curt (Denise) Braby, Cary (Debbie) Braby, Carme (Todd) Lilienthal, Craig (Kathi) Braby, Casey Braby, and Cami Braby and special friend Bill Walters. Step-children include Robert (Sue) Buck, Melody (David) Brokaw, Marjory (Merle) Comer, Ann (David) Hughes, and numerous grandkids and great-grandkids.
Preceding her in death were her father, Emeral Wheelen; mother Florence Wheelen; uncle Earl Wheelen; and aunt and uncle Laverne and Maxine Worthington.
Visitation was held Wednesday, Nov. 2, 2016 from 6-8 at the Armstrong Funeral Home in Mount Ayr, IA with services held on Thursday, Nov. 3, 2016 at 11 a.m. at the Armstrong Funeral Home in Mount Ayr, IA with Randy Drake officiating.
Honorary pallbearers were “Granny’s Grandkids.” The final resting place is at Platteville Cemetery at Athelstan, IA at a later date.
Memorial funds have been established to HCI Care Services of Mount Ayr, IA and the Alzheimer’s Association.