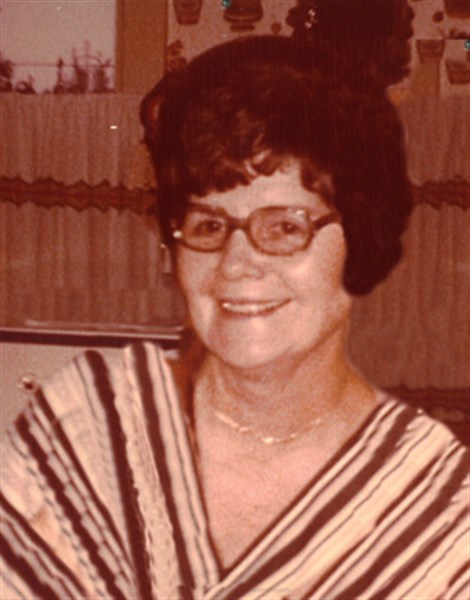 Agnes Eileen (Freemyer) Matheny was born into this world on February 18, 1925 the oldest child of William Freemyer and Opal Deardorff Freemyer in Grant City, Missouri. She left this world on December 16, 2016.
Eileen was educated in Maloy, Iowa. She married the love of her life Earl Matheny on January 24, 1942 in Grant City, Missouri. They lived in Blockton the first few years of their marriage. Earl went into the Navy in the fall of 1942 and was discharged in 1945. She was a homemaker during Earl’s absence, raising their children Donna and Karen. Upon his return from the war, they lived for a short time in Conway working as tenant farmers before returning to Clearfield. Son Earl Dwight was born during this time. Earl worked for Massey Harris in Clearfield upon their return.
They moved to Creston in 1953 while Earl worked at the HyVee store as a produce manager. They lived in Creston until 1960 when they returned to Clearfield and purchased the E&E Grocery store. Earl and Eileen ran the grocery until son Dwight bought them out in 1975. Eileen spent her life as a homemaker and worked along side Earl for years.
Eileen was an avid reader, seamstress and cook. She read her whole life until her eyesight was taken from her, passing along her love of reading to her family. She spent her life cooking and taught many of her family to be the excellent cooks they are now. Her love of family was the most important to her. Spending time with her children, grandchildren, and great grandchildren was extremely special to Eileen.
She was a member of the Legion Auxiliary, Methodist Women’s Circle and the Clearfield Methodist Church. She was happy to see all of her friends and visit with anyone who came by. She loved life and spreading joy to all. After Earl’s death, Eileen continued to live in their home until her passing.
Eileen is survived by her daughter Donna (Keith) Moore of Creston; their daughter Diane (Randy) Long, son Jason Long, his daughter Josie, daughter Amy Long, her children Tyler and Ivy; son Jeremy Long, his daughter Rylann; their daughter Heather (Jon) Ecker, their children Madison and Hayden; their daughter Karla (Nic) Denney, their children Josh (Paige) Hancock; their son Nathan (special friend Hayley) Hogue and son Booker; their son Clint (Shaun) Kniep, their children Jillian and Tessa; their daughter Tammy (Glen) LaFratte, their daughter Miranda; their son Blake (Mikki) Moore, their daughter Reagan: daughter Karen Elliott of Clearfield, her son Lester (Amber) Elliott, their son Brody; son Dwight (Carol) Matheny of Clearfield; their daughter Courtney (fiancé Donnie) Snyder, her children Alex York, her son Jace, sons, Trey Snyder and Kaden Snyder; sister Donna Gray; brother Wes (wife Lynne) Freemyer; Harold (special friend Enid) Freemyer; brother-in-law Wilbur Matheny, a host of nieces, nephews, and special friends.
She was preceded in death by her husband, Earl in March of 1989; her parents; grandchildren Larry, Lannie, Lonnie, and Angela England; great-grandson, Benjamin Dodge; son-in-law, Lester Elliott; sisters-in-law Ardith Sickels and Mary Lou Walkup; brothers-in-law Joseph Matheny and Arlo Stewart, sisters-in-law JoAnn Freemyer and Harriet Ann Freemyer.
A memorial fund has been established in her name. Armstrong Funeral Home of Clearfield and Mount Ayr is in charge of the arrangements.
Services were held Tuesday, December 20, 2016 at the Clearfield United Methodist Church in Clearfield, Iowa with Rev. Michael Shaffer officiating and Shaun Kniep and Jeremy Long providing the music.
Casket bearers were Paul Roger Whitmore, George Bailey, Gordon Still, Dwayne Cason, Doug Boyer, Gregg Beggs and Joe Routh. Honorary casket bearers were the seven grandchildren, fourteen great-grandchildren and eight great-great-grandchildren.
The final resting place is in the Clearfield Cemetery at Clearfield, Iowa.