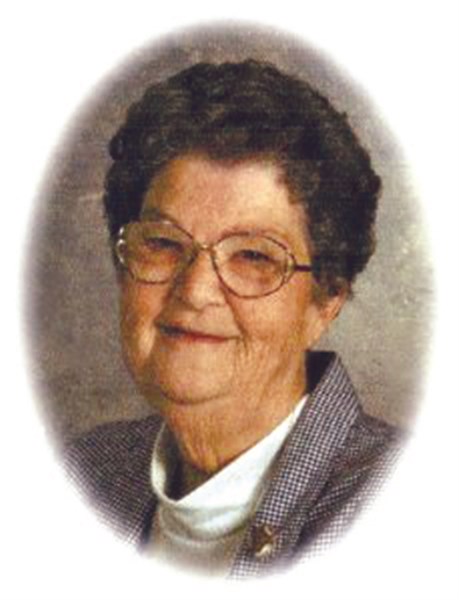 Mary Joe Oliver, the daughter of Joe N. and Mary Amy (Loutzenhiser) King, was born on December 31, 1926, at the family home in Bronson, Iowa. Her family later moved to Redding, Iowa, where they lived for several years.
Mary Joe graduated from Redding High School in 1944. She also met her future husband, Willard Wesley Oliver, Jr., while living in Redding. Mary Joe and her family then moved back to Bronson, and she worked for Younkers in Sioux City, Iowa.
After a short long-distance relationship, Mary Joe and Willard were married on February 16, 1945 at the Methodist Church in Redding. The couple farmed with Willard’s father for a short time before renting Doc Fullerton’s farm for two years. They moved to Spirit Lake, Iowa where they lived for a year, and then to Elliott, Iowa, where they lived for five years. They finally relocated in Shelby County, Iowa, where they raised their five children. Mary Joe sold toys at in-home toy parties, as well as running her own ceramic business. She also worked at the Irwin Locker in Irwin, Iowa, and as a playground supervisor for the Irwin School System.
Mary Joe was a member of the Irwin United Methodist Church, Irwin, Iowa. She was also a member of the Eastern Star, Irwin Chapter. Mary Joe was exceedingly proud of her children and grandchildren, and loved spending time with them. She especially enjoyed family meals. Traveling with family and friends was a favorite pastime, and the family often did tent camping in state parks when the children were young. Mary Joe was also an avid card player.
Mary Joe Oliver died on Wednesday, February 8, 2017 at Myrtue Medical center in Harlan, Iowa. She had reached the age of 90 years, one month, and eight days.
Mary Joe was preceded in death by her parents; one daughter, Marjorie Kay Oliver; and three sisters, Carabell Simmons, Margaret Skerich, and Lenore Hillers.
She is survived by her husband of nearly 72 years, Willard W. Oliver, Jr. of Irwin, Iowa; two daughters, Amy (Dennis) Coenen of Harlan, Iowa and Nancy (Mike) Perrigo of Dallas, Texas; three sons, Fred (Linda) Oliver of Oakland, Iowa, Steven (Deb) Oliver of Dysart, Iowa, and Scott (Mary) Oliver of Dearborn, Missouri; 13 grandchildren; 19 great-grandchildren; and other relatives and friends.
Burmeister-Johannsen Funeral Home, Inc. of Harlan and Shelby, Iowa are in charge of the arrangements. Burmeisterjohannsen.com/3062/mary-joe-oliver-february-8-2017/