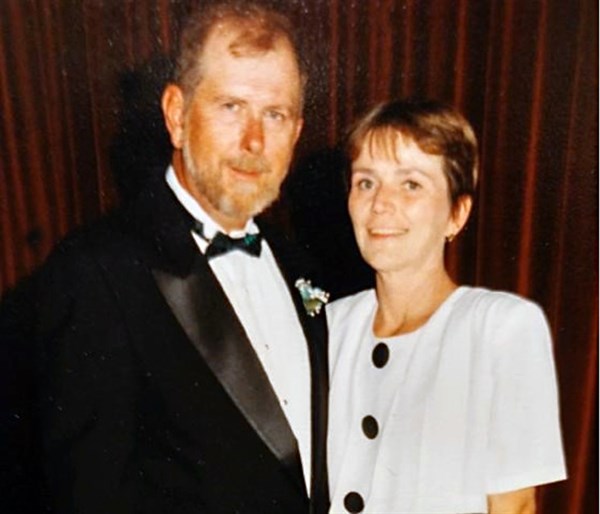 Robert Faye Haley was born in Creston, Iowa on September 21, 1946 to James Calvin and Dorotha Olive (Lane) Haley. Bobby grew up in Benton, Iowa “running the town” with best friends, Larry Bowen, Oscar Bowen and Gail Matthews. He graduated from Mount Ayr High School in 1965 and joined the Navy where he was deployed to Vietnam serving as a storekeeper with a rank of SK2.
Linda Gayle (Ferguson) Haley was born in Ruston, Louisiana on October 7, 1949 to H.T. and Leola (Lockwood) Ferguson (Shaw). Linda grew up in Birmingham, Alabama attending Glenn Vocational High School. After high school Linda married Roger Morris and to this union Cynthia Deanne was born in 1967. They divorced and Linda and Syndi moved to New Orleans, Louisiana. Shortly after, Linda met Bob while he was stationed in New Orleans serving in the Navy aboard the U. S. S. Hyman.
Bob and Linda were married on October 14, 1968. To this union were born two children, Rebecca Sue in 1969 and Bobby Jo in 1974. Bob adopted Syndi in 1971. The family moved to Creston but eventually settled in Mount Ayr where Bob was a District Lineman for Iowa Southern Utilities which ultimately became Alliant Energy.
Through the years Linda was known to be a housewife and homemaker and even became a certified caregiver for many of the local children while their parents worked. In 1982 Linda and Bob purchased the Southside Tavern. The bar was sold in 1992 and Linda found pleasure in helping elderly friends and neighbors by giving rides to and from doctor visits. She also spent time working at the Neighborhood Center, Hospice and would help wherever she was needed.
After Bob retired in 2007, he continued to enjoy fishing, hunting, golfing, gardening, Thursday nights at the Hunting Lodge, and spending time with his grandchildren. Linda was hospitable to every person who crossed her path. If you left their home hungry, it was not her fault. They both loved to hunt for Morel mushrooms and were renowned in knowing all of the best spots.
Bob and Linda passed away in their home in Benton as the result of a fire on February 10, 2017.     Left to cherish their memories are their children, Syndi (Jim Weaver) Noble of Winterset, IA, Rebecca (Joao) de Araujo of Tustin, CA, and Bobby (Cora) Haley of Creston, IA; Linda’s sister, Judy Jackson of Benton, IA; brother Ronnie (Loretta) Ferguson of Birmingham, AL, step-brother, Claude Mann of Dallas, TX; Bob’s sisters Joan (Donnie) Stringham of Benton, IA, and Mary Jane (Ernie) Garrett of Diagonal, IA; grandchildren, Dakota (Nick Shoman) Noble of Des Moines, IA, Christopher (Heather Edrozo) Noble of Winterset, IA, Breanne Haley of Creston, IA, Nathaniel, Christopher and Kaylee Wells of Creston, IA, Emily Edrozo of Winterset, IA, and a soon-to-be-born great-granddaughter from Dakota Noble; accepted grandchildren, Jayden, Chloe, Abby Jo, Kenley, and Brylee, children of niece Megan (Tracy) O’Neill of Clarinda, IA.
Linda was preceded in death by her parents, and step-brothers, Carl, Larry and David Mann. Bob is preceded in death by his parents; and sister, Julia Ann (Donnie) Stephens.
Bob and Linda leave behind many cousins, nieces, nephews, friends, and acquaintances to grieve their loss. The Mount Ayr and Benton communities have lost two great souls who touched many, many lives.
Visitation will be held at Armstrong Funeral Home on Wednesday, Feb 15 from 5:00 p.m. to 8:00 p.m. Services will begin at 10:30 a.m. Thursday, Feb 16 at United Baptist Presbyterian Church with Rev Mike Maddy officiating. Burial is in the Benton Cemetery with military honors by the U.S. Navy Honor Guard Unit and Ringgold Post #172, American Legion. Memorials are to the family to be decided. Online condolences may be left at www.armstrongfh.com.