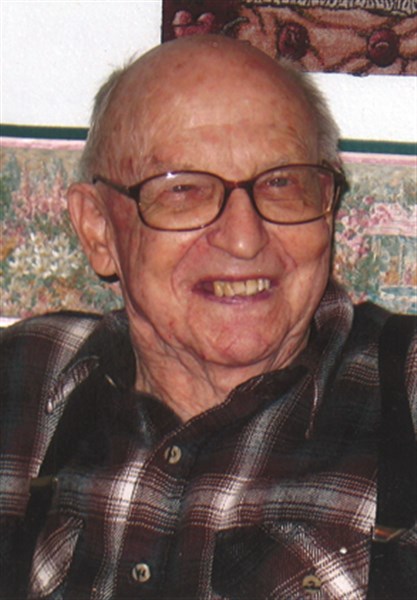 Wayne Cecil Bohn was born November 11, 1925 in Lamoni, Iowa to John Daniel Bohn and Elma Lydia Lou (Gilliland) Bohn. He attended country school in Ringgold County, Iowa.
On June 15, 1950, he was united in marriage to Irene Marie Todd. They made their home in rural Diagonal and Kellerton where Wayne farmed, until they moved to Fort Madison in 1956. After moving to Fort Madison Wayne began working as a prison guard for the Iowa State Penitentiary.  He continued working there for over 30 years. While they lived in Fort Madison, Wayne would always welcome family to come visit, and he would be their tour guide or take them fishing on the river.
In July of 1992 they moved to Mount Ayr where they maintained a home. Wayne always enjoyed taking care of his yard and their flowers, and it was hard to satisfy him when he became unable to. Wayne and Irene had a special love for their pug dogs and cared for them as their own children.
Wayne moved to the Mount Ayr Heath Care Center in 2008 where he passed away on Sunday, March 26, 2017.
Left to cherish his memory are his sister-in-law, Janice Richman of Mercer, MO; two nephews, Frank (Joan) Gunsolley of Diagonal and Byron (Charlotte) Gunsolley of Maryville, MO; two nieces, Joy (Jim) Goins of Diagonal and Linda (Eldon) Starmer of Creston; special friend, Betty Haney; many great nieces and nephews; and extended family. He was preceded in death by his parents; wife, Irene in 2013; one brother, Bill Bohn; two sisters, Clela Gunsolley and Wuanita Bohn in infancy; one brother-in-law, Gene Gunsolley; and special friend, Cecil Haney.
Services were held at 11 a.m. on Thursday, March 30, 2017 at the Armstrong Funeral Home in Mount Ayr, Iowa with Pastor Bill Armstrong officiating. Visitation was from 10 – 11:00 a.m. before the  service at the funeral home.
Casket bearers were Frank Gunsolley, David Richman, Byron Gunsolley, Steven Richman, Joy Goins and Todd Richman.
Burial is in the Diagonal Cemetery at Diagonal, Iowa. Memorials go to the United Church of Diagonal.