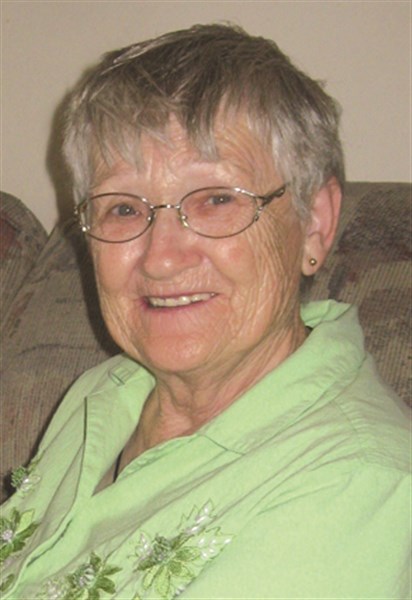 Dorris Arlene Mathany was born on Oct. 22, 1928 in Beaconsfield, Iowa, to Francis Leonard and Lula (Ellison) Mathany. She was the oldest of 11 children. She graduated from Mount Ayr High School, then went on to Normal Training to become a teacher. She taught school for one year.
On July 17, 1947, Dorris was united in marriage to John Wallace Dailey. They lived in several communities before settling in Bayard, IA in 1964. She was a devoted wife, mother, and life-long member of United Methodist Church, and Methodist Women. She loved doing things for others, including taking ladies to doctors’ appointments, grocery shopping and playing games at the nursing home. She enjoyed spending time with her children and grandchildren. She was an avid letter writer, never forgetting to send a birthday card. A favorite of the neighborhood children, she always had fresh baked cookies for them. She loved playing cards and always had a deck on her dining room table. When she didn’t have people to play with, she’d play solitaire on her computer.
John passed away in December of 2007. She continued living in the home they had built until September of 2016 when she spent six months at Thomas Rest Haven in Coon Rapids while she recovered from an illness. She worked very hard to be able to return to her home, which she did, on April 1, 2017.
Dorris passed peacefully from this life on April 3, 2017 in her home in Bayard at the age of 88. Funeral services took place 10:30 a.m., on Saturday, April 8, 2017 at United Methodist Church in Bayard. A visitation took place at the church one hour prior to the funeral.
Surviving her is her son, Jack (Bev) Dailey of Albion, NE; daughters, June Wright of Albion, NE, and Jerry (Joe) Knobbe of Coon Rapids, IA; 25 grandchildren; 39 great-grandchildren; 19 great-great-grandchildren; four sisters; and three brothers.
Preceding her in death is her husband, John Dailey; four children in infancy: Francis Verle, James Edward, and twins Lila Jean and Lucy Jane; two brothers; and one sister.