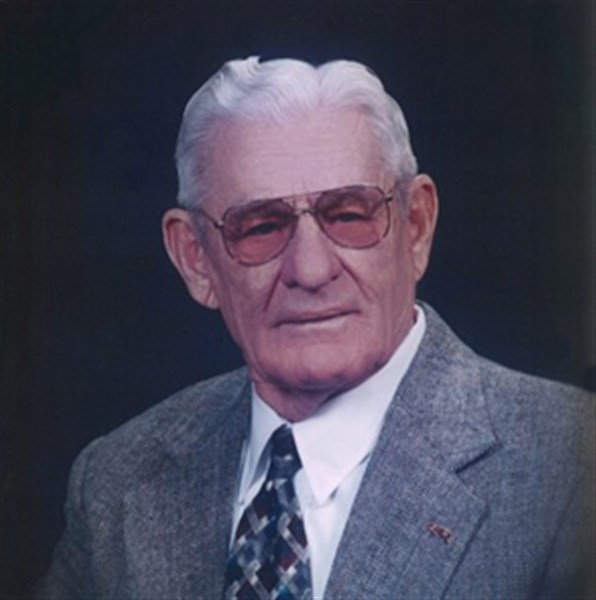 Marion Victor Creveling, son of Carl and Mary Creveling, was born December 12, 1921 on a farm north of Ellston, IA.  He departed this life on April 6, 2017 at the age of 95 years, 3 months and 25 days at the Mount Ayr Health Care Center.
Marion spent most of his life in and near Ellston. His mother passed away when he was seven and his father when he was eleven. After their passing he lived with an uncle where he worked on the farm and continued to go to school. He attended Ellston Public School, graduating in 1941.
Marion entered the United States Army on February 4, 1943 at Camp Dodge. He completed his basic and corpsman training and then shipped out to the south Pacific where he served with the 8th Portable Surgical Hospital. His last tour took him to Hiroshima, Japan, a month after the atomic bomb was dropped. He was honorably discharged on December 13, 1945 as a Staff Sergeant.
After World War II, Marion and his brother Kenny bought Frank Adams’ hardware store. Soon after they added a service station and bought two trucks. In 1950, Kenny was called to duty. Marion bought Kenny’s interest in the business, sold the trucks and continued to operate the hardware store and service station for another 20 years.
Naomi was the love of Marion’s life! Together they raised three sons; first in Ellston, then moving in 1961 to the Johnston family farm. Adding the farming to the hardware and service station business, with its crops, chickens, hogs and cattle, kept Marion busy. He liked working with his cattle the best. He also worked several years for the Agricultural Stabilization and Conservation Service (ASCS) measuring fields and assessing crop damages.
In 1984 Marion and Naomi retired to the house that they built on Sun Valley Lake. They enjoyed slowing down a little, spending more time together and with family and friends. There was also time for fishing, playing golf and more card games together. If Marion couldn’t be found at home or pulling weeds on the farm, he could be found at the Sun Valley Lake Golf Course, playing golf, picking up sticks or pulling weeds. When he took up golf, it was a big surprise. It wasn’t a surprise that he took it seriously. At age 90, he could still shoot his age.
Marion was active in the community with the American Legion, serving on the Sun Valley Water Board, and even for a time as the Mayor/Sheriff of Ellston. The American Legion was very important to Marion, recently receiving a certificate to commemorate seventy years of continuous service.
Marion always had a smile and a kind word for anyone he met. He and Naomi loved nothing more than a house full of family and friends. He adored his grandchildren and great-grandchildren and spent countless hours with each of them, memorably playing nosey poker, serving their dessert (upside down) and dressing too many itty bitty fish.
Marion was preceded in death by his wife Naomi; his parents Carl and Mary; siblings Ruth, Elvyn (Jake), Lawrence (Mug) and Kenny. Left to cherish his memory are his three sons William of Clive, IA, Robert (Liz) of Ellston, IA, Dennis (Sharon) of Waukee, IA; sister Helen Schaedlich of Des Moines, IA, sister-in-law Norma Creveling of Mount Ayr, IA; five grandchildren; nine great-grandchildren; many nieces and nephews, cousins and friends.
Memorial contributions may be made to the Emmett Liles Post 541 American Legion, in Ellston.
Visitation will be held at Armstrong Funeral Home in Mount Ayr on Thursday, April 13 from 6:00 p.m. to 8:00 p.m. with funeral services beginning at 10:00 a.m. Friday at the United Methodist Church in Ellston, Iowa. Rev. Bruce Giese will be the officiant. Casketbearers are Robbin Creveling, Shawn Creveling, Nikolas Creveling, Brian Creveling, Brandi Walker, Chelsi Hepner and Nathan Creveling. Burial is in the Ellston Cemetery. There will be military honors at the cemetery by the Emmett Liles Post 541 American Legion of Ellston and the Iowa Honor Guard Unit.