BY MIKE AVITT
Thanks to Alfred Holck for this week’s photo. I met Alfred when I was a member of the Burlington Route Historical Society.
In 1871, the Burlington & Missouri River Railroad began to construct a branch line from Creston to St. Joseph, Mo. The same year, the B&MR started another branch line from Chariton to St. Joseph. So, by 1872, both Leon and Bedford had a railroad. In the late 1870s, a narrow-gauge railroad was built from St. Joseph to Albany, Missouri. However, there were still three county seats in the area without a railroad: Bethany, Grant City, and Mount Ayr.
The newspapers were filled with rumors of “the coming rails.” Would the narrow-gauge build north? Would the Des Moines to Kansas City line go through Grant City?
In early 1879, the Chicago, Burlington, & Quincy (formerly the B&MR) announced plans to build a line to Mount Ayr. A company called the Leon, Mount Ayr, & Southwestern was organized and work began that spring. The road continued south out of Leon to Davis City, then west to Lamoni (which was incorporated that year). From Lamoni the rails headed northwest to Tuskeego and Kellerton. Kellerton was the first town in Ringgold County to see a train.
From Kellerton, the line went west to Mount Ayr and the line was completed September 22, 1879. Four days later, regular train service began. In 1880, the railroad would head for Grant City.
From Mount Ayr, the Leon, Mt. Ayr, & Southwestern reached Delphos in July 1880. Then on to Redding and Grant City. Irena did not yet exist. I found in the Ringgold Record a post office was established and given the name Irena on October 4, 1883.
Mrs. Skeen was the first postmistress. The line was completed to Grant City, Mo. on September 8, 1880 and regular service began on September 13.
The depot shown this week is not the original depot. Grant City’s first train station caught fire and burned in April 1905. The new depot was completed by February 1906.
The line terminated at Grant City until 1899 when the rails went on to the Albany Junction. The towns of Worth and Gentry were created with the extension.
In August 1879, the Leon, Mt. Ayr & Southwestern announced they would build to Bethany in 1880. This was done by establishing a junction one mile east of Lamoni and a line being built through Andover, Blythedale, and Ridgeway before reaching Bethany.
From Bethany the rails went west to New Hampton and onto the Albany Junction.
All the lines built by the Leon, Mt. Ayr, & Southwestern were leased by the Chicago, Burlington, & Quincy Railroad upon completion. The CB&Q took ownership of these lines in 1901.
The narrow-gauge (three feet six inches between rails) from Albany to St. Joseph was widened to standard gauge (four feet, eight and one half inch between rails) in 1884.
The train stations at Leon, Lamoni, Mount Ayr, Albany, and Bethany are all still standing. These depots are monuments to the “Iron Horse.” 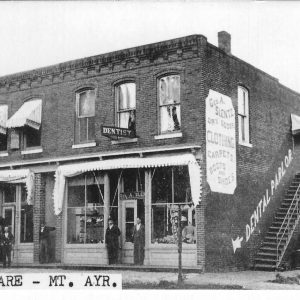 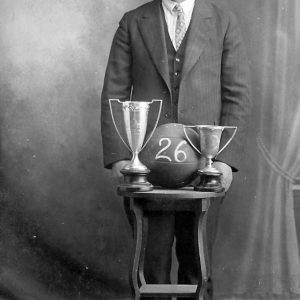 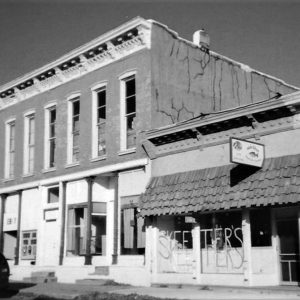 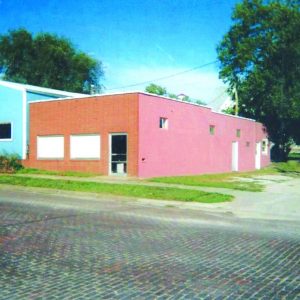